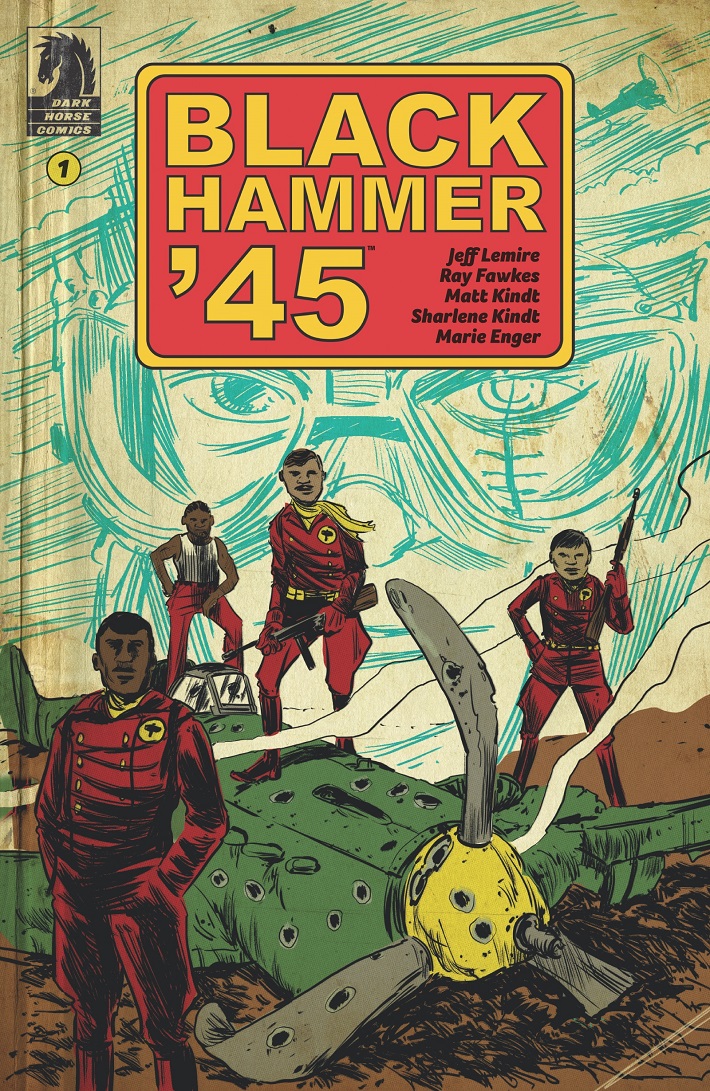 The Black Hammer universe has been growing and expanding at Dark Horse. Each spin-off brings it’s own flare, it’s own heart and soul, yet retains ties to the heroes of Black Hammer. With Black Hammer ’45, we are transported to the past as the Black Hammer Squadron flew the skies fighting against the Axis powers. But this is the world of Black Hammer, and nothing is as it seems.

From Jeff Lemire and Ray Fawkes, with art by Matt Kindt and Sharlene Kindt, and letters by Marie Enger, this book is different than what you see on the shelves this day. We get a back and forth story about Captain Hammer and his squadron, from the hard-hitting past fighting evil forces and the occult, to the present day, as the Captain and one of his crew, Li, are still around and ready to celebrate a special, somber day, but we are unsure of what. The Black Hammer Squadron is who the Air Force sends in to stop the end of the world, whether by air, on land, and against the supernatural. But on their last mission, the squadron is sent to retrieve a family of scientists to help with a “Project Weird”, but this sets them on a collision course with the mechanized terror The Red Tide and the deadly and ominous Ghost Hunter, the most lethal pilot in the skies.

Lemire and Fawkes create such a cool hybrid story here: we get a fantastic beginning to a tale of war, mixed in with the superheroes and supernatural elements fans of Black Hammer are used to. Kindt’s artwork is its own beast, which I love. I love how his work stands out as unconventional, and yet is always emotional and relatable to the reader. The seeds are planted to see how this all ties to the Black Hammer universe, with Golden Gail making an appearance, and with the mention of Project Weird, which may have ties to the powerful Colonel Weird.

Black Hammer ’45 is an outstanding start to the laying more of the back story to the Black Hammer Universe. Sure to be a tale of loss and hardships, I am on board 100% for this series.