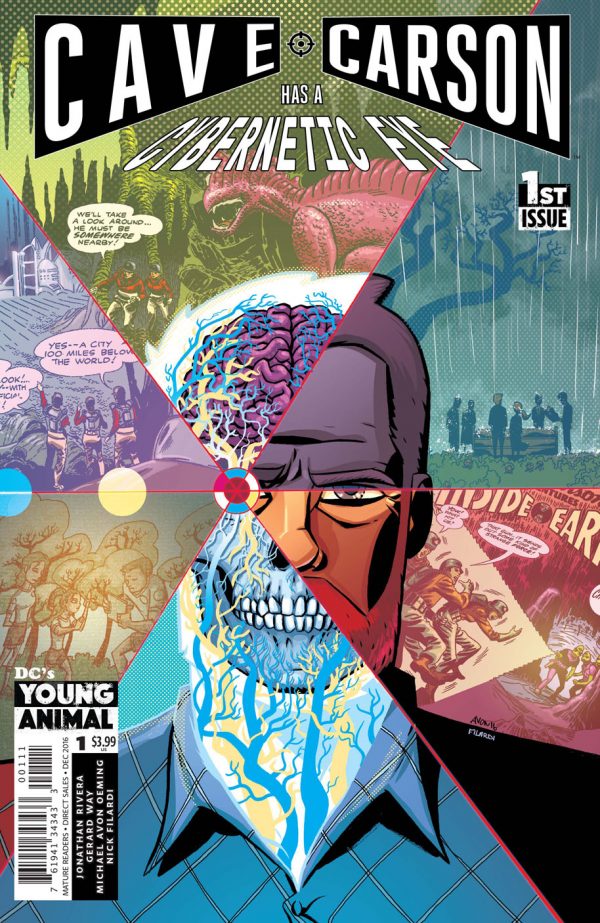 Cave Carson is back… wait, who? You’ll see

When DC Comics announced their Young Animal imprint, spearheaded by My Chemical Romance’s Gerard Way, I was more than excited for it. Way’s Umbrella Academy comic book series was fantastic, so I was ready for more books from Way. Cave Carson has a Cybernetic Eye is the third series from the imprint, and brings back a very unlikely character (or two, or three…).

The character Cave Carson is one that has been around for awhile now, just not many people know about him. Debuting in 1960’s, Carson is a spelunker who has helped the Rip Hunter and the Time Masters, the Sea Devils, Aquaman and more, yet never really getting recognition like, say, Mr. Hunter, now headlining a show on The CW. I won’t lie to you, I have never read a book with Mr. Carson in it, I purchased this off of two reason’s: it’s part of Way’s Young Animal imprint, and Michael Avon Oeming is the artist (one of my favorites). What I got was a mind trip, a time warp, and a heck of a read.

So, here it goes. Cave Carson is an explorer of the highest caliber, discoverer, adventurer, father, husband… and he has a cybernetic eye. No reason why he does, but I am sure we will get some sort of explanation as the series continues on. Cave’s life caves in (sorry, had to) after his wife Eileen falls ill and passes away. It leaves Carson trying to find his way in life, all while dealing with the repercussions from the aforementioned eye. His life gets sucked back into the land of the weird, which leads to one of DC’s iconic, yet forgotten during the Rebirth saga, super teams, not to mention a certain vigilante.

Written by Way and Jon Rivera (Heartbreak) with art by Oeming, I was thoroughly impressed with this debut issue. Is it a bit bizarre? Of course, but look at the title of the book: odd kind of comes with the territory. But it is also highly entertaining with a flair of nostalgia to old school DC fans. I’ll be back to see what happens to Cave and his crazy eye, and I think you would be too if you check out the inaugural issue.