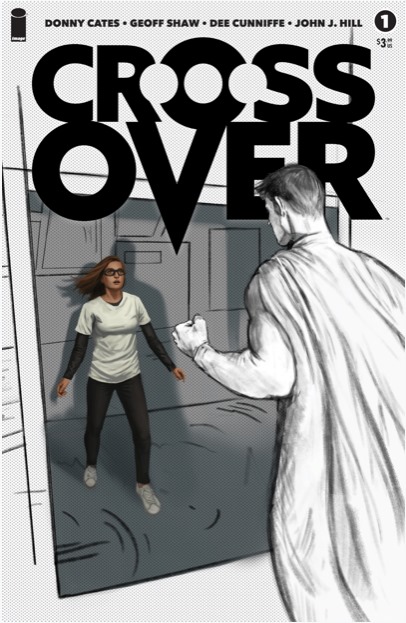 Donny Cates has become the writer to watch when it comes to comic books. From his fantastic work on God Country to his exciting entries into the Marvel Universe, the man knows how to tell a great story. With Crossover, Cates, artist Geoff Shaw, colorist Dee Cunniffe, and John J. Hill tackle comics’ most prominent reason for a mega event- a cross over.

In 2017, Colorado was rocked by a massive cross over- comic book characters from everywhere came to life and came to duke it out with each other. No one knows why or how, but it shook the world. It made the public hate the characters, who presumably are still fighting in the current day. Ellipses is one who actually likes the heroes. She rocks cosplay and works at a comic shop, which isn’t a popular choice right now. But when a little girl named Ava comes into the store, Ellipses’ life is thrust in the middle of this titanic battle.

This book is absolutely a love letter to the comic book art form. The ending will throw you for a loop and have you wondering how. Cates creates a story so big yet boils it down to a few key characters and their reactions in this world. Shaw’s artwork is fantastic, especially seeing Ava, who is unique in her own way. For a book called Crossover, we don’t see a whole lot of the actual crossover, just hints, and Easter eggs. But I am not complaining. Cates and company set up this titanic series perfectly, leaving us wondering if the ending is exactly what it seems like, and if so, what’s next?

Image Comics nails it with Crossover. It’s a massive, mega-event book that focuses on what matters at the end of the day: the individual lives of those affected by it. Go pick it up if you can find a copy.