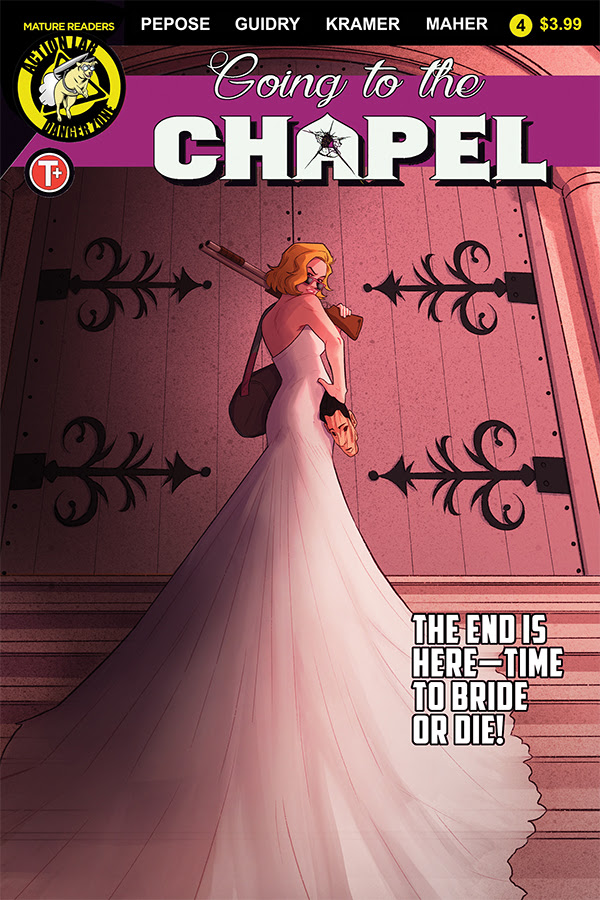 It has been a heck of a ride for Emily and her groom to be Jesse. What was supposed to be a typical wedding has turned into a nightmare. The Bad Elvis Gang has taken the entire wedding party hostage. Without spoiling much of previous issues, the bride had a history with one of the bandits and is questioning whether or not she wants to marry Jesse. Making an impromptu decision, she has put her relationship in jeopardy. On top of that, the church is surrounded by police, and the wedding guests are getting impatient.

With mounting tensions inside and outside the venue and her future now in question, Emily must do what she feels is right to ensure the future she gets is the one she wants. Although it’s not going to be an easy one, she is confident she will make the right decision.

With each issue of Going To The Chapel, writer David Pepose has escalated the drama and action. It was like climbing a mountain and enjoying the journey the whole way. The end of issue #3 reached the peak of said mountain, and in this last issue, it’s about coming down the mountain. It can be a tough task to keep the same momentum through to the end, but Pepose pulls it off. He does it in a way that is touching and very funny, and consistent with the quality of what has come before.

I have stated this in reviews of previous issues, but Emily is one of the most relatable, realistic, and sympathetic characters to come along in a while. In that little chapel in the middle of the desert, a relationship has forever changed, and the lives of those involved may never be the same. In this final issue, she has to finally face the consequences of what she has done and realizes what has been important the whole time. All of this, while Jesse, who has been stuck in a weird spot, also has to make important decisions about his future. The Bad Elvis Gang also find themselves in an interesting position that they must find a way out of. There is a lot of stuff to be wrapped up, and this issue does it in a very satisfying way. All may not be “happily ever after,” but it’s the closest we are going to get in this particular tale.

The writing and the characters are fantastic, but they wouldn’t mean much in this medium if it wasn’t for the artists who visually bring them to life. As usual for this wonderful series, artists Gavin Guidry and Liz Kramer do fantastic work bringing this world to life. It’s always bright and colorful, and it feels right for the story they are telling. The character designs are charming and great to look at. It has a realistic tone while also being something else entirely. It all works so well together.

Going To The Chapel is easily one of the most clever and original new series out there. Each issue upped the ante, and it is very cool to see how it all ends. The finale is about coming to terms with your decisions and doing the right thing. It’s a great conclusion to a series that has been an absolute blast since the beginning. I already know I’m going to miss it, but I can’t wait to see what comes next from the creators of this charmingly wonderful series.