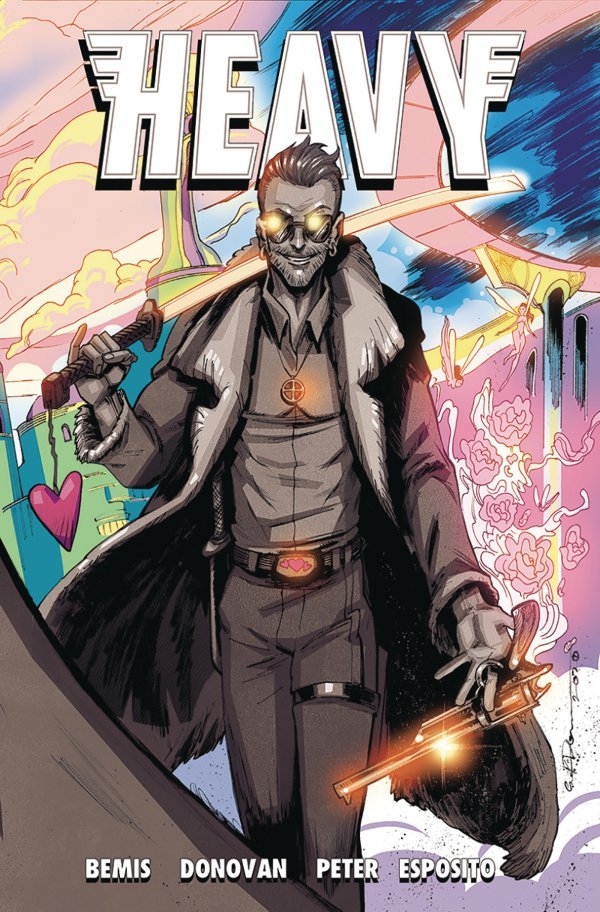 Things are getting crazy in the Big Wait as Bill is trying to keep his sanity due to his new reckless partner. How long he is going to be with him, there is no way of telling. But he does know this: if he wants to see his wife again, he needs to learn to roll with the punches (and the bloodshed and the massacres) and get along with him. Let’s jump into Heavy #2 from Vault Comics.

When we last left Bill, he had just been reintroduced to Slim, the man responsible for his and his wife’s death. Before this, Bill was making a decent living being a Heavy in The Big Wait. A Heavy is essentially karma at its most extreme; they travel the multiverse punishing people for their wrongdoings. It was a good life, but then along came Slim.

Slim’s arrival and assignment as Bill’s new partner complicates matters quite a bit. This issue begins shortly after the two become partners, and things are not going well. Their methods are quite different, and Bill isn’t having any of it. The sucky part about it all is that if the two don’t learn to work together, Bill May never get to see his wife again, and his afterlife will have been a waste. It’s a tough life in The Big Wait, but it’s the end goal that matters most.

To say that Heavy has been a wild ride so far is an understatement. This second issue is full of action, violence, blood, sex, and giant monsters created from human reproductive fluids. It digs deeper into the mythology, and we get a better glimpse of what other worlds are out there in this universe, and it’s fantastic. One world features a version of Helen Keller that isn’t as saint-like as she was here, and although we don’t see it, it sounds very interesting. This series is full of exciting possibilities to explore.

Written by Max Bemis, the book is filled with quick and hilarious dialogue that keeps the pace of the story flowing at a solid pace. There is a lot going on in the book, and a lot of story needs to be covered. While the artwork in the series is incredible, it’s the words the characters speak that really shine. The story is about big guys with guns who wreak havoc across the multiverse, but it’s big guys with a sensitive edge. It’s no surprise, knowing Bemis’s songwriting background that he fills the pages with emotion and that everything has a rhythm to it. In issue two of Heavy, the layers of the characters are revealed, and we get to peel back the story a bit to reveal what is really going on.

At its core, Heavy is an existential character study. It’s fun and games on the surface, but it has some interesting questions about the nature of love and life itself. It never gets bogged down by any of this, though, and I’m not even sure if that’s the point, but it is to me. This is a wholly unique and interesting world created by Bemis and co-creator Eryk Donovan, and I can’t wait to spend more time with it.