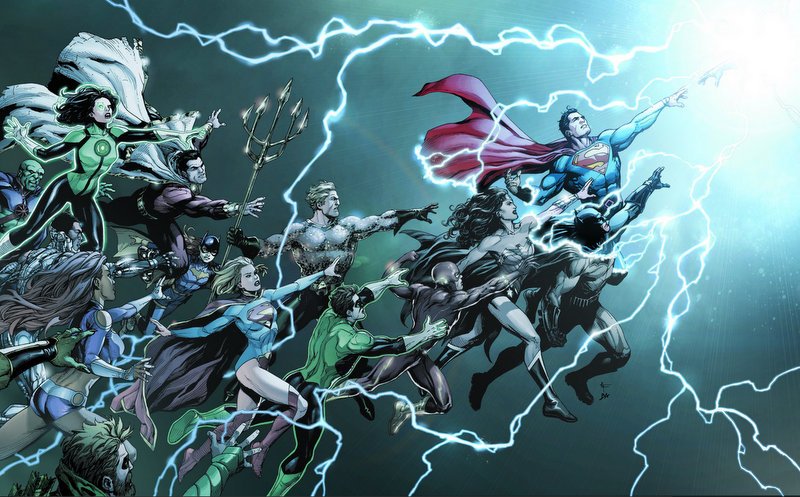 DC Universe Rebirth Will Make You Believe Again in the DCU

With the media storm surrounding the release of DC Comic’s DC Universe Rebirth, fans across the globe held their collective breath as we all hoped that the DC Universe would be saved from itself. Well, a hero has emerged, and his name isn’t Batman or Superman: It’s Geoff Johns.

Johns, longtime scribe for DC Comics and the man behind many epic story lines throughout the DC Universe, writes a blockbuster issue that spans across so many heroes and villains, as well as a plethora of artistic talent who send the DC Universe into it’s next phase.

Spoilers ahead for those looking to still check out this fantastic issue firsthand.

When the “New 52 Universe” hit, DC lost me as a fan. To forget about the history of the characters we have all grown up with was too ridiculous to imagine. Now, I tried to get on board for some of the titles, and some were pretty great (Animal Man, Batman), but for the most part, it lost me. Not all the heroes we have seen throughout the years were a part of this universe, including one that fans cried out for louder than anyone else: the man who took up the mantle after Barry Allen gave his life to save the universe- the Flash, Wally West.

The whole issue centers around West, the original Wally West, who has been lost in time and trying to find his way back to reality. He sees how the world changed during the New 52, and knows that someone is behind it. His trip around the DCU is a trip down memory lane as he visits a focal point of the whole Flashpoint event that changed it all, cries out to rally the long forgotten Justice Society, sees glimpses of a lost Legion, and comes face to face with his hero- Barry Allen. In an emotional sequence of events, West readies for the end when Allen pulls him back to reality, remembering the long forgotten DCU himself.

Who is behind this all is hinted at to a group nobody saw coming: The Watchman. Alan Moore and Dave Gibbon’s masterpiece set a standard for superhero comic books, and now these violent characters are somehow connected to the DC Universe. Johns writes a love letter to the history of DC Comics, and sets a stage so grand, many of us can’t even fathom what is next to come. This issue restored my fate in DC, and has me on board for this “not a reboot” rebirth.

DC Comics has its Superman with Johns, let’s see where the universe goes from here.