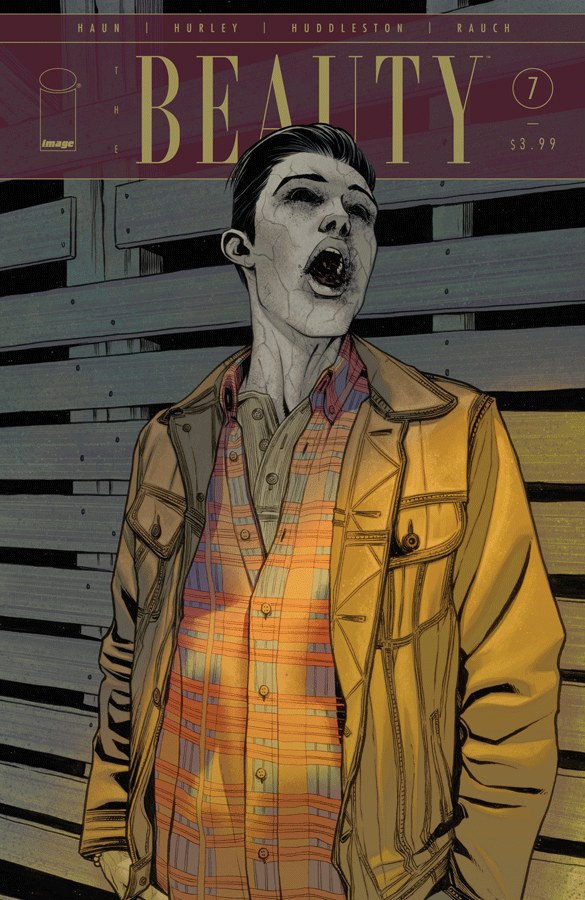 The Beauty #7 Review: Revenge of The Beauty

Hot on the heels of the amazing first story arc of the groundbreaking series The Beauty, Jeremy Haun, Jason Hurley, and Mike Huddleston introduce fans to new characters and new corners of The Beauty universe.

With agents Foster and Vaughn (who featured prominently in the first arc) nowhere in sight, fans are introduced to a very large gang member named Timo. After taking out his entire gang single-handed, Timo seeks out the disease in order to hide and get a fresh start. With a new look and new identity, can he escape his troubled past and begin a new life free of his past sins?

Jeremy Haun and Jason Hurley do not miss a beat as they transition to the second part of their story about a world where a disease can make you physically perfect, but will eventually turn you into a human-kabob. Introducing a fascinating new character known as Timo, the writers show a darker side of the disease (aside from the spontaneous human combustion) and show an unintended advantage of the disease, which is its ability to disguise people.

It is always a testament to the quality of the writing when the reader can instantly like and root for a character. This is especially true when they have the character commit a string of murders and the readers still feel attached. Hopefully, the writers will continue to build Timo’s backstory and future as the second arc continues.

Overall, this is an amazing start to the second part of The Beauty saga. With a fascinating introduction to a new character and a new chapter to the story, The Beauty continues to deliver great stories and great art month after month.

Rating: 9.75 out of 10. A great opening to what appears to be an exciting second act.