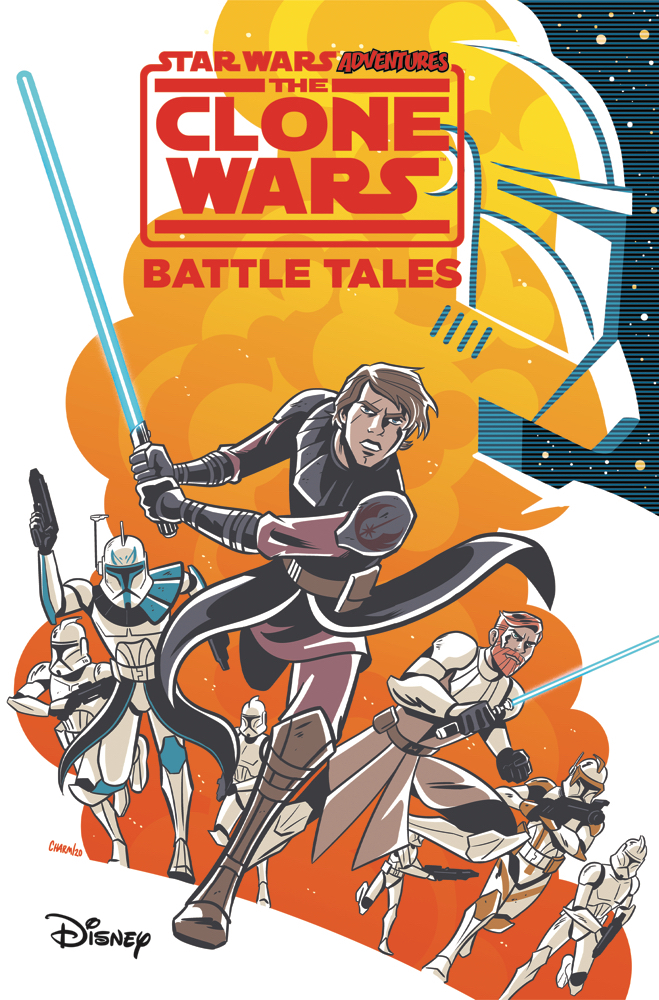 We start out witnessing a battle between the Galactic Republic Clones and the Separatist Battle Droids. The droids lay down, suppressing fire, keeping the clones at bay. The battle droids call in for reinforcements to better their odds, and moments later, the Super Battle Droids arrive, causing even more havoc on the battlefield. Hope is not lost as without warning, one of the SBDs starts to hover and is sent flying away by none other than Jedi Master Plo Koon, who is accompanied by Jedi Master Obi-Wan Kenobi, and Jedi Knight Anakin Skywalker, who all leap into battle literally pushing back the opposition with the force. The struggle doesn’t last much longer as the Jedi make quick work of the droids; this also gives the clone troopers a mental boost to keep going. With the droids either destroyed or having retreated, the Jedi regroup to plan their next move.

The rest of the comic centers around the clones fighting on the planet Hisseen while the three Jedi fight Count Dooku. This story takes place before the Star Wars: The Clone Wars movie. There is also more of a focus on the Clones than the Jedi and what the Clones go through during a conflict. It’s nice to see things from the troopers’ perspective. I like that they focus more on the Clones, so we get to see how different Clones deal with the trials of war; some want to turn tail and run, while the majority would rather face their enemy head-on.

The story of this battle is interlaced with stories from various troopers’ past. Commander Cody tells stories about his adventures with Obi-Wan. Captain Rex talks about his time with Anakan, and Commander Wolffe speaks of his encounters with the Separatist while under Plo Koons orders. Each story shows us a different way the Jedi interacted with their Clones. Many Jedi did take their Clone Troops for granted from what I know, but seeing how these three Jedi actually cared for them shows better light on the Clone and Jedi relationship. They even show us a time when some of the Clones had issues with each other and how they were resolved; this made the troopers more human and how they each have different personalities than just taking orders without question and being fodder be used. The movies do not do the Clones justice, and like the Clone Wars show, we get to see a side of the wars that aren’t shown elsewhere. I also like that many of the troopers showed their own personality by how they dressed. Cody, Rex, and Wolffe all wore different colors other than just plain white, and each of the Clones under their command also had various ways to show this. They all had different designs using the color of their commander. Even further than this, most of them had different styles of hair. Some wore mohawks; some had bald heads, some had facial hair; this went a long way to show their individualism amongst the rest of their brothers despite all having the same basic genetic design. From a visual perspective, this helps the readers know which Clone is which as it would be confusing to know who some of them are without them being directly addressed.

The artwork in this is fine, everything was pretty straightforward, and I had no trouble trying to figure out what something was, at times. It reminded me of the older Clone Wars three-season series drawn in the same style as Samurai Jack called Star Wars: Clone Wars.

One thing that I didn’t like about this would be one specific panel where Commander Cody looks young, and then in the next panel, he looks like an adult male; this seemed a little odd to me. Another time a Jedi fought an enemy but didn’t use his lightsaber very much and could have easily ended his foe but was unable to.

While the stories of the past adventures were nice, there were times when the stories came up at weird times, such as in the middle of battle. The only other thing that I didn’t like about this is that right, in the beginning, it seems that the Clones are about to be taken out when the Jedi come in and turn the tables on the droids, the Jedi seemed to have come out of nowhere, and it seemed like the Clones weren’t expecting the aid of the Jedi. This seemed unrealistic to me, and the Clones should have accounted for the Jedi.

Overall, I enjoyed this graphic novel. It’s always nice to see Star Wars’ perspective from another point of view that is not from the Jedi. I like seeing how the Clones do things when there aren’t Jedi around, and getting to see many various tales of this is really cool. I want to read more stories like these in the future, maybe even some featuring the Storm Troopers during the Original Trilogy era.

If you are a fan of the Clone Troopers and you want to see more than what is in the movies and TV show, you should absolutely check this graphic novel out.

Jeremiah Gagnon is a happy-go-lucky goofball of a guy with a passion for all things Superheroes, D&D, and Comic Books. Gagnon is an amateur Magician as well. He currently lives in Eagle Point, OR. You can follow him on Facebook, YouTube at PressXForAwesome, Instagram @unicyclezombie, Soundcloud, TikTok @magic_man95