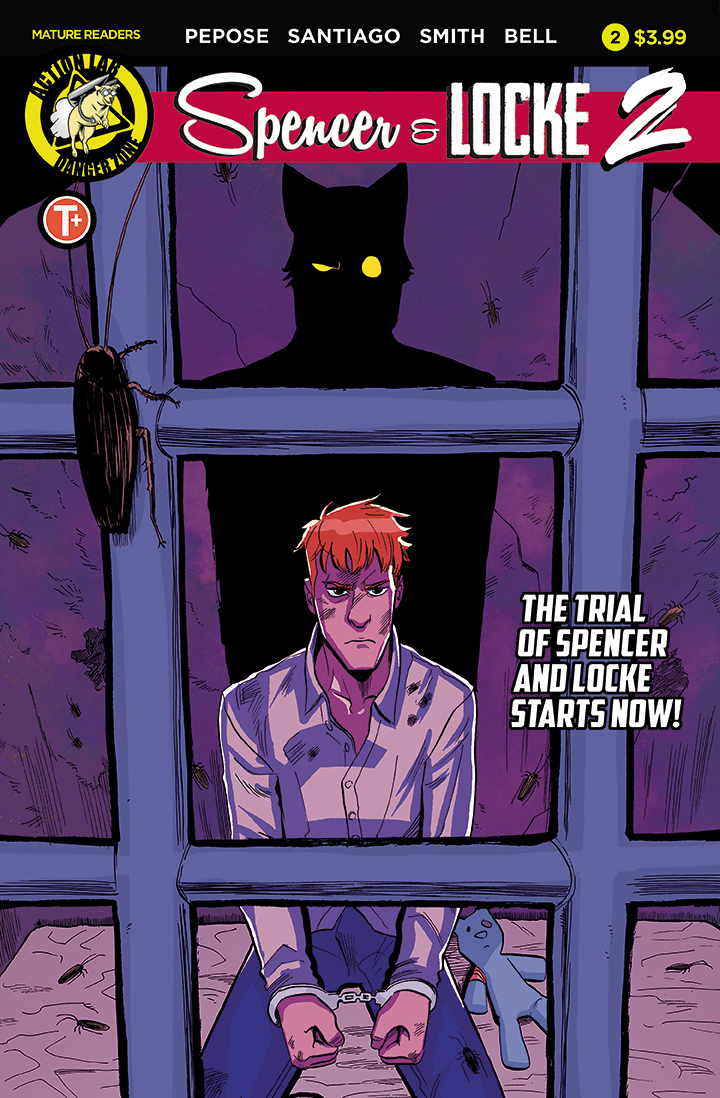 The trial of Spencer and Locke begins in the second issue of part two of the series. And it is easily one of the most thrilling issues of the saga so far.

In the last issue, Detective Locke was dealing with the aftermath of his actions from the first part of the series. He was suspended from the force and forced to seek psychiatric help. The only thing that he can think about is getting reunited with his young daughter, Hero, as well as getting back out on the streets to stop the criminals of his town. And that’s when psychopath Roach Riley shows up and starts wreaking havoc. His goal is the same as Locke’s, to get the criminal trash off of the streets, but his methods are extreme and dangerous. Much like Locke, he also has an imaginary friend, but one who is pulling the strings. But who exactly is Riley, and who is pulling the strings?

Roach Riley has now been locked behind bars, but not for long. He easily escapes his tiny prison cell, leaving a trail of bodies behind him. Locke and his imaginary partner Spencer are willing to do whatever it takes to find him and bring him down, using brute force if necessary. That is precisely what gets them in trouble and on the opposite side of the law. After being taken into custody, the trial begins. But the trial doesn’t last long before Roach crashes the party and starts to take justice into his own hands.

Meanwhile, Locke’s reporter girlfriend Melinda Mercury is uncovering clues about Roach’s mysterious past. After a coincidental run-in with the mad man himself, she finds her biggest lead yet, and it brings her closer to the truth.

I don’t want to give away too much more, but I do have to say, the ending to this issue left me really, really excited to see what happens next.

This second issue of the second part of the Spencer & Locke series starts strong from the very first page and never lets up. Writer David Pepose keeps the action going at a very nice pace, not letting up for a second, and it instantly draws you in. As with previous issues, the scripting is well thought out, and you always know what exactly is going on. Even if you haven’t read any other issue in the series, you would have an easy time reading this and have a basic understanding of what is happening. There are also new characters based off of the funny pages in the newspaper, and they are great. They have a life of their own. They may seem familiar, but they are a lot different than you remember here. I love that the tradition of that continues in this series.

Another thing that makes a Spencer & Locke story so fantastic is the beautiful artwork by Jorge Santiago Jr and the colors by Jasen Smith. It’s so beautiful and fun to look at. It’s got an exciting noir feel to it, but it’s often contrasted by bright colors and an almost cartoon-like art style at times. It’s a beautiful aesthetic.
The Spencer & Locke story just keeps getting better and better. With thrilling action, intriguing story, and fascinating villains, there is never a dull moment. I’ve been invested in the story since the beginning, and I would recommend this series to anybody. Go out and grab this issue and all the ones that came before!