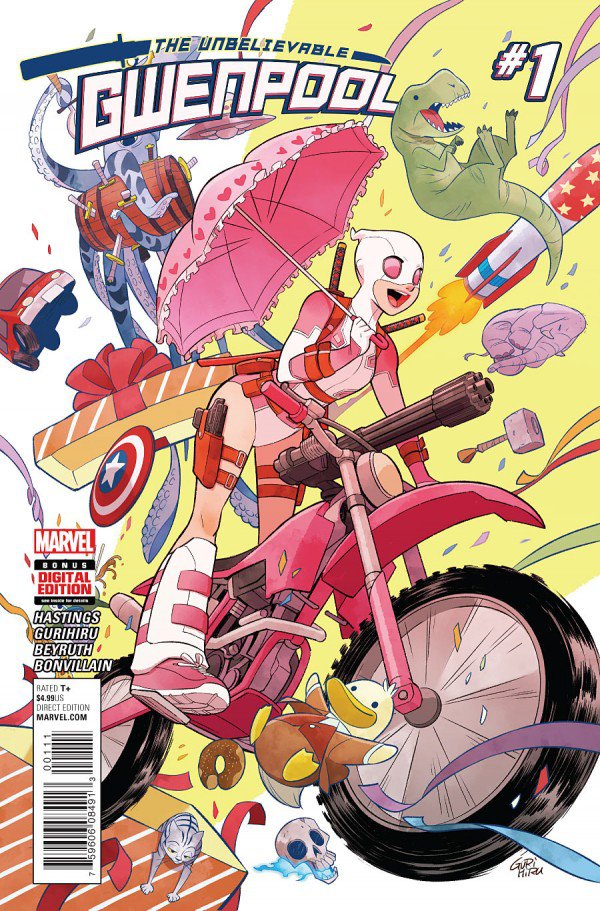 Deadpool-mania has been running wild for years now, and with the hit film that dropped in February, his popularity is growing by the day. So when it came time for a month full of variants honoring the long departed Spider-Man character Gwen Stacy, artists created her in the vision of other heroes, including one merging Gwen with Deadpool to create Gwenpool. Well, the design was a hit, and eventually, she was introduced into continuity, and now has her own series.

So, I know what you are thinking: a series about a cheap, mash-up of Deadpool and Gwen Stacy? No thanks, sounds like a gimmick.

It is a gimmick, but an extremely well done one at that, and a very cool concept to boot.

Writer Christopher Hastings and artist Gurihiru (and Danilo Beyruth on the intro) come together to bring this popular character to the forefront. Gwenpool, despite the name, it not actually Gwen Stacy- she is literally Gwen Pool, a girl from a world that is much like ours. So much, that she reads Marvel Comics- and is then one day thrown into the Marvel Universe. Thinking she is literally in a comic book, Gwen decides to become a masked vigilante and does whatever she wants- if it’s a comic book, its fake, and that means no rules, no laws, no anything… right?

Hastings writes an extremely well done first issue that shows Gwen treating the Marvel U like, well, the Marvel U. From creating her own effects for panels (money signs in the eyes), to figuring out how to beat a Sentinel from remembering an old X-Men video game, Gwen teeters on the fourth wall, which makes for an unbelievably enjoyable read. Gurihiru’s artwork is fantastic- I love the animated feel of the whole book, and the character designs are spot on. From Gwen to the vilest big head in Marvel, M.O.D.O.K., this book and its inhabitants have never looked better.

I didn’t know what to expect from this book- but what I got out of it was a great read with a shocking ending that will change the status quo of the character for sure. Gwenpool pokes fun at lame villains and questions costume designs, just like readers would, and that right there helps make the connection. Let’s see where our lost little “hero” ends up next.