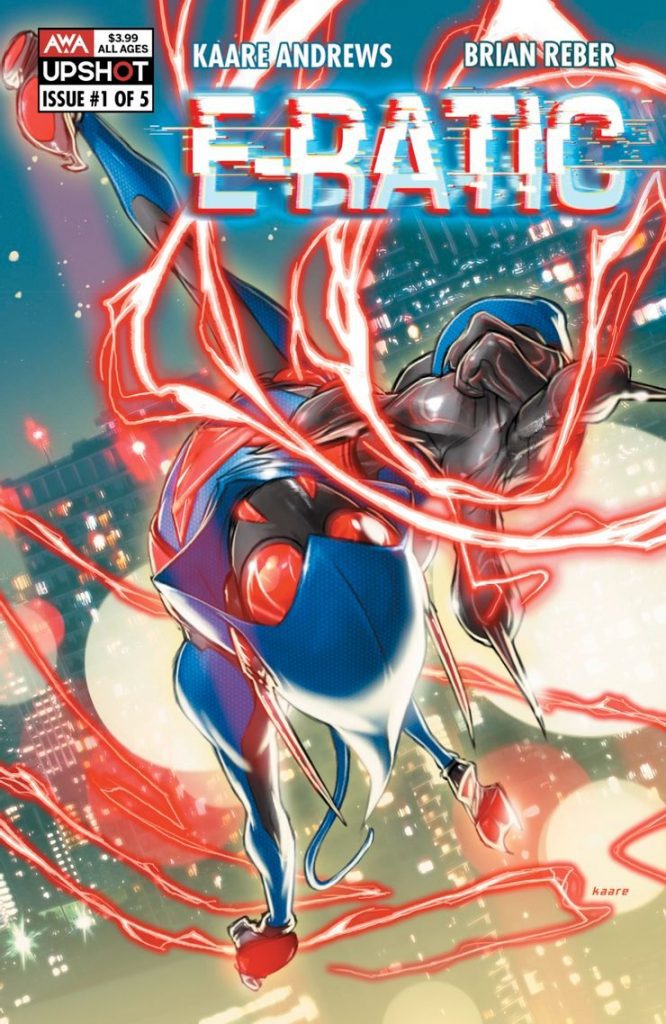 One of the biggest reasons I grew up a fan of Spider-Man was that he was a teenager that messed up. He was smart, yeah, but he was consistently bullied while trying to save the world daily. Well, Spider-Man grew up, and his problems changed. AWA’s latest series, E-Ratic, gives us a glimpse at a modern-day hero walking in the webs of the arachnid legend.

This book from Kaare Andrews serves as a great jumping-on point to what looks to be a fast-paced, energy-driven action romp. Oliver Lief is brand new to his high school and city, as he and his family just relocated. But Oliver has a secret- for ten minutes a day, he has incredible superpowers. But only for 10 minutes. We see glimpses of Oliver suited up, including a fantastic opening sequence and a display of powers at the end. But what we mainly see is the characterization of Oliver- a shy, bullied kid who is running from his destiny. He has a brother who shines in the high school spotlight and a mom who has hit some hard times.

I am a big fan of Andrews; I have been for quite some time. His artwork and story here are stellar. I love the character designs, especially Oliver’s costume. This issue shows a lot of Oliver and his interactions at school and lack of at home, which I think will build to some explosive moments.

I really enjoyed this first issue. Sure, I would love to have more action and more costumed characters. But great stories take time to build, and I can wait. Make sure to check this one out; AWA hits another home run with E-Ratic.