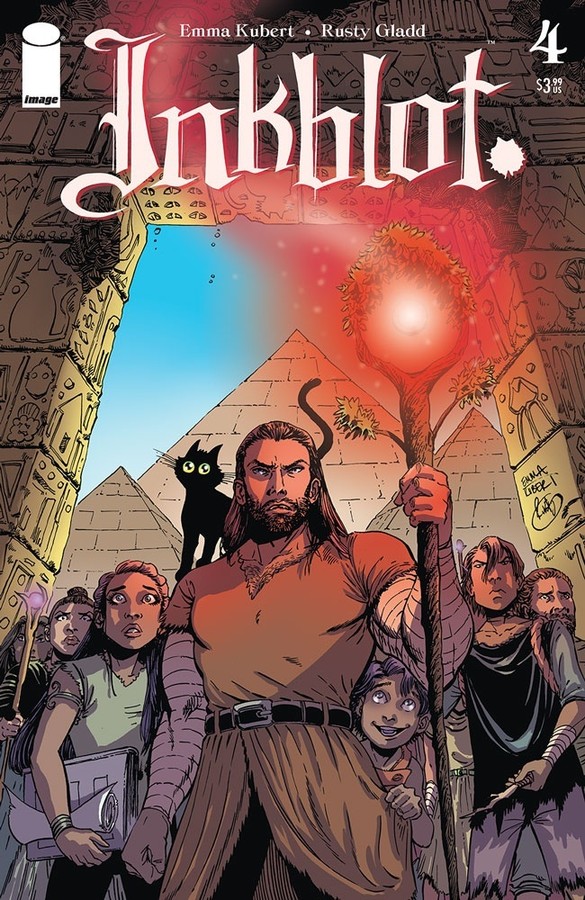 When I was looking for a comic to review, Inkblot #4 caught my eye. I had not read the first three issues, but the premise looked interesting, and the artwork really grabbed my attention.

I am so glad I followed my gut. This was an excellent read. Without knowing what had happened in the previous issues, I was able to jump right into the story. It begins in ancient Egypt (in another universe) with a man and his extended family and friends traveling across the desert. After a frightful and magical encounter with the Sphinx, the story takes a fantastic turn with a change in scenery and a startling revelation about “the cat” and what it can do.

After reading this issue and learning about what the cat can do, I wanted to read the previous three issues and continue the story in issue 5.

The writing and artistic team of Emma Kubert and Rusty Gladd create a visually stunning and fascinating story. Their personality and creativity shine through the characters and beautiful artwork. Not only that, but it appears that the cat has its own unique visual style in the story, which is cool and fascinating.

At the end of the comic, readers will also find a heartfelt message from Rusty Gladd that shows his and Emma Kubert’s passion for the comic and their craft. It makes you appreciate the comic even more.

A really interesting story that got my curiosity spiked and made me want to catch up on the story and know what happened after. I really liked this one!