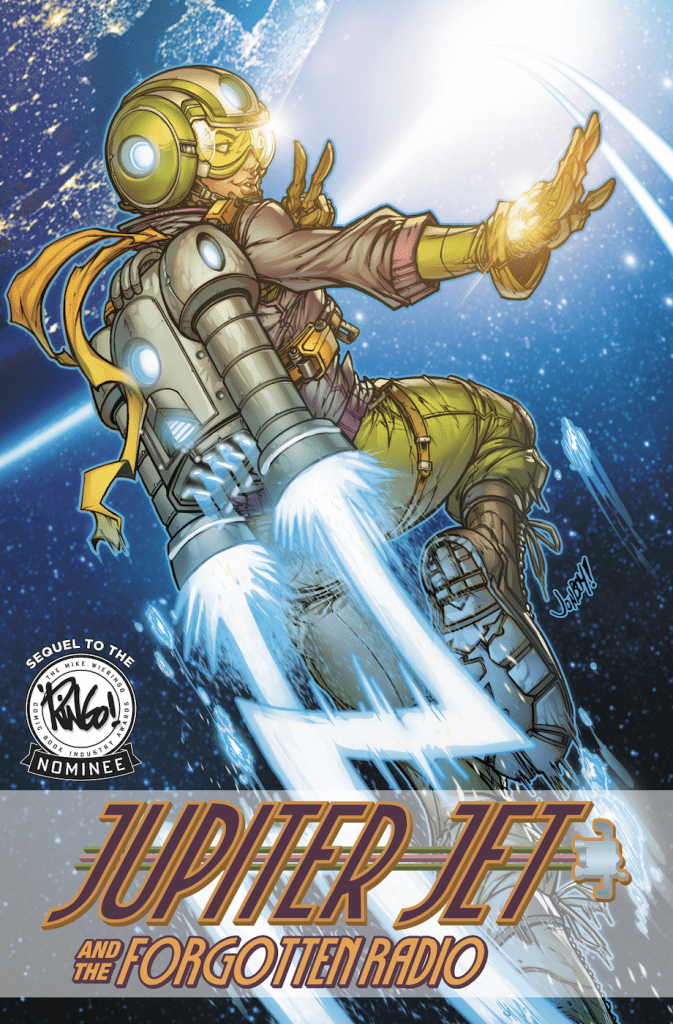 My first impressions from looking at the cover are that I am in for a wild adventure.

Starting out, we get a quick glimpse as to who Jupiter Jet is. Her name is Jacky Johnson, a 17-year-old who lives in a colony in Europe, one of Jupiter’s moons. While doing some maintenance in space, she gets attacked by a robotic head with six arms. She quickly dispatches it when her younger brother speaks to her over the radio, telling her about a fire that she needs to put out. After getting her picture in the newspaper with a few firefighters, Jacky has a very heartwarming dinner with her younger brother, aunt, and uncle, only for an old lady to interrupt and bring Jacky and her uncle, a man known as Gabriel, to a meeting with the Resistance. An alert rings out during a heated debate, and Jupiter Jet flies out for an unexpected meeting…

The rest of the comic book turns into an old west meets outer space adventure with some superhero action sprinkled in. They bring an old trope in with some added twists, and although it felt a tad predictable at times with their use of foreshadowing, they manage to make it unique enough that there are things you wouldn’t expect to see. None of it feels overdone either. Also, Jet Packs are used effectively without taking away from any of the story.

The artwork feels hand-drawn and original. It is realistic and very detailed, from the wrinkles in people’s clothes to the stubble in people’s five o’clock shadow. The spaceships feel like something out of Star Wars and or Star Trek. The jetpacks also look great and not too crazy, although if you compared them to the one in The Mandalorian, they are bulkier. The characters all look distinct, and no one looks like a copy of someone else. Even better, some of the characters were drawn from real-life humans. Without even knowing who the character is or what they do, you can tell if they are a fighter, a worker, or someone else. They even managed to incorporate wild, wild west themes into the story without it feeling unnecessary.

The story felt a little predictable, but they also used foreshadowing effectively. There were a couple of times when I was reading something, and I thought to myself, That is going to come up later to aid the protagonist. Even so, there were times when they foreshadowed something, and I didn’t realize it until after the fact. They used the characters’ past effectively, and it all helped to make the universe of Jupiter Jet feel lived in, and I am curious to know more of the lore of this universe. At the end of the book, they give previews of Volume 3, teasing us with little snippets, and I think they will touch on more of what happened in the past so we can better understand the present and have an idea of what the future will hold. I like their use of showing and telling; they used newspaper clippings a couple of times to show us what happened rather than spending time on needless storytelling that wasn’t super important to the story they are telling. There were even panels where no dialogue was being used.

There aren’t a whole lot of negative things I can say about this graphic novel. There are times when it seems the science is off from reality, such as when they are in space. There are also times when one character says something, and the protagonist doesn’t quite pick up on the underlying meaning. There is also a part of the plot that seemed weird to me, and their explanation didn’t make any sense to me. There was also a plot device that seemed to have a double meaning, and it left me a little confused.

Overall, I really enjoyed this volume of Jupiter Jet. The next one seems like it’s going to explain more of the lore of this world. I even love that they very lightly teased it right in the middle of this story, helping set up a bigger underlying story. I would recommend this to anyone who is a fan of space westerns and jet packs. I have high hopes for the next volume in the series.