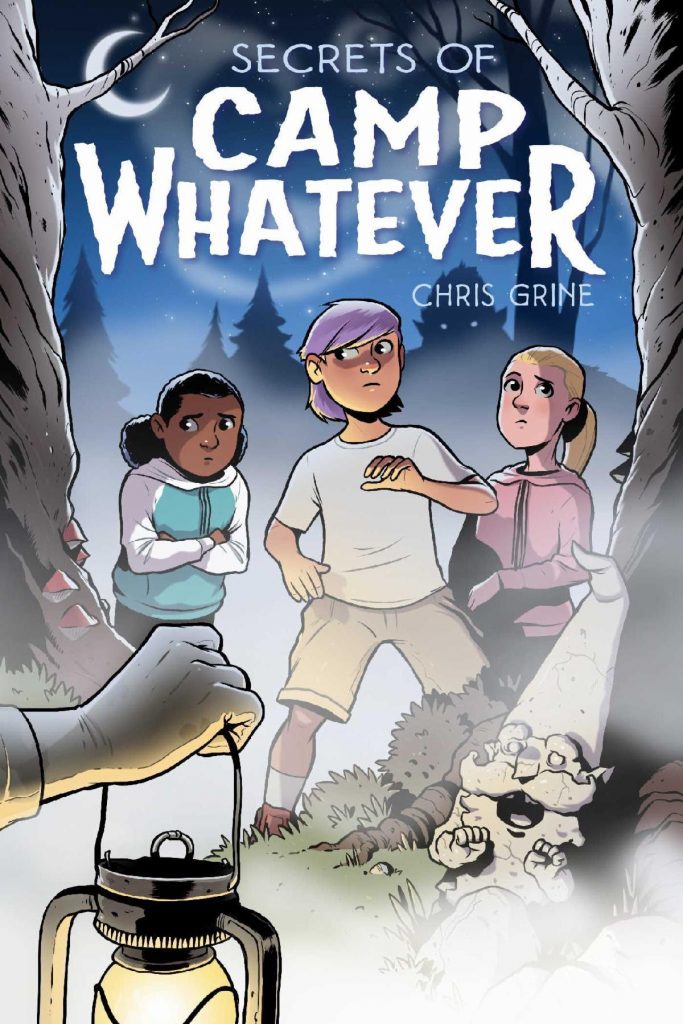 Hi! My name is Evelyn Benson, a junior reviewer for Pastrami Nation. Today, I’ll be talking about “Secrets of Camp Whatever” from Oni-Lion Forge.

The main character, Willow, finds herself in a new situation. She is hard-of-hearing, and her parents signed her up for camp. And boy, is she in for a surprise! From mystical creatures to strange happenings, Willow and her new friends must discover what really lies in the fog that surrounds the camp. Adding to the mystery are the camp staff (particularly Mr. Elric), who are a bit odd and enforce peculiar rules regarding the dark.  Willow is a very adventurous girl who desires to unravel the bizarre goings-on.

Willow, in my opinion, is awesome. She is competitive and yet easy-going. I really like her style. I also like that she rocks purple hair. I’ve always wanted to go to camp, and this is a graphic novel I can easily get lost in. Chris Grine wrote and illustrated a magnificent graphic novel. The overall plotline was a real page-turner. The constant twists and folklore were a nice touch. Grine was able to propel the eerie story forward while maintaining a comedic aspect. The artwork was perfect, especially the characters. The reader can see their personalities and moods, just with simple facial expressions. An important part is that Willow relies on sign language when not wearing her hearing aids. Grine was able to portray sign language in his panels.

I definitely recommend this for readers ages 8+. It’s eerie but not scary. Altogether, it is a hilarious and very well done graphic novel. I can’t wait to see more from Chris Grine! Watch for the release, and don’t miss out! Be sure to pick it up at your local comic book shop!

Eleven-year-old Evelyn Benson is the first Junior Reviewer for Pastrami Nation. She loves animals of all sorts, and enjoys her plethora of pets. Her interests include: Doug the Pug, Harry Potter, The Amazing World of Gumball, art, and The Mandalorian.