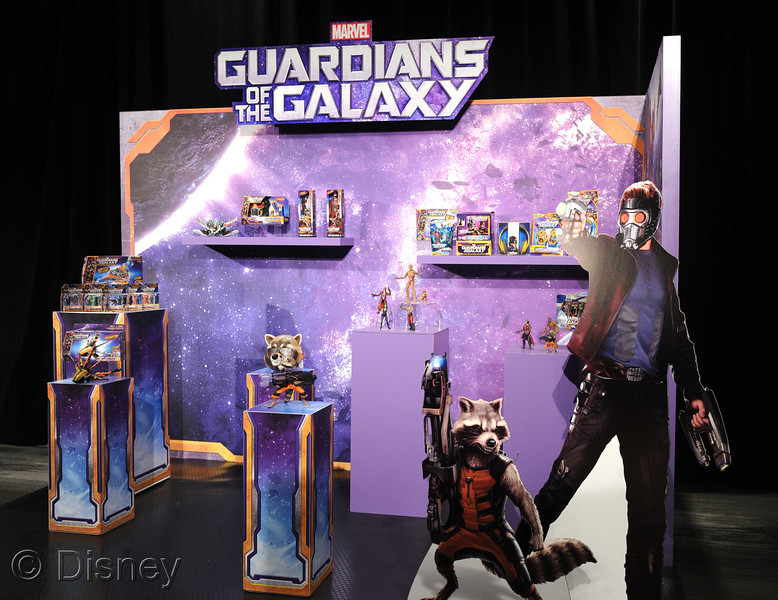 (NEW YORK)– During an action-packed event on Monday, February 17, at the 2014 American International Toy Fair, Disney Consumer Products unveiled its dynamic product lines that will dominate boys toy aisles this year with offerings inspired by highly anticipated content: Disney’s Planes: Fire & Rescue, Star Wars Rebels, Marvel’s Guardians of the Galaxy and The Amazing Spider-Man 2 from Sony Pictures Entertainment and inspired by Marvel’s iconic web-slinger. Special guests Dane Cook, voice of “Dusty Crophopper” in Planes: Fire & Rescue, Freddie Prinze, Jr., voice of “Kanan” in Star Wars Rebels, and Andrew Garfield and Jorge Vega of Amazing Spider-Man 2 introduced content that debuted exclusively at the event and revealed never-before-seen toys to retailers, toy and industry influencers. Chris Pratt of Marvel’s Guardians of the Galaxy made a special appearance via video to share his excitement about how his character’s stories are being brought to life through the action packed Guardians toy line.

“Disney Consumer Products is firing on all cylinders across our diverse franchise portfolio, and at this year’s Toy Fair we’re building off a successful 2013 to showcase the best of our new and storied properties that will heat up toy aisles in 2014,” said Josh Silverman, executive vice president, global licensing at Disney Consumer Products. “We’re excited to see these four properties take off at retail as we know these innovative products will resonate with kids and fans who want to create their own heroic stories.”

Disney Consumer Products, the world’s leading licensor of entertainment properties,  understands how kids today play, and is working with best-in-class licensees such as Hasbro, Huffy, JAKKS Pacific, Just Play, LEGO, Mattel, Thinkway and more to deliver character-driven, storytelling-infused toys across play patterns. From classic action figures and vehicles, to expertly crafted playsets and creative technology-infused products, this epic lineup encourages kids of all ages to recreate key moments from these properties and imagine new ones.

Product highlights from these exciting toy lines include:

Planes: Fire & Rescue is a new high flying comedy-adventure that debuts a dynamic new crew of elite firefighting aircraft that will fly into theatres in 3D July 18, 2014. Products take flight at mass retail starting in June.

·         Planes Fire Blastin’ Dusty Crophopper toy by Mattel (SRP $49.99, available June 2014): Help world famous air racer Dusty Crophopper save the day and put out the blaze by scooping up “water” balls and racing to the rescue.  Take aim, pull the lever and shoot the “water” balls at the “fire” targets to take them out. Comes with multiple targets and “water” balls that store in plane pontoons. Realistic sounds and phrases triggered by “Smart Sound” technology enhance the play.

Star Wars Rebels
The animated television series Star Wars Rebels introduces a new audience to the epic generational franchise with all-new exciting, action-packed adventures that will release in the fall of 2014 on Disney XD. Beginning in February, fans will be able to find exclusive and licensed Star Wars products in Disney Store locations and on disneystore.com, with Star Wars Rebels items arriving this fall; all other Star Wars Rebels inspired products will be at mass retailers in September.

·         LEGO Star Wars Rebels Ghost Ship (SRP $79.99): Get ready to battle the Empire with the Rebel heroes’ awesome starship – The Ghost – as seen in the thrilling Star Wars Rebels animated TV series! Stay on course with Rebel minifigures in the two cockpits and put Zeb on patrol in the 360-degree rotating turret. Land the Phantom starship (not included) in the docking area at the rear. With 2 spring-loaded shooters and storage for a spare missile and a Lightsaber, this ship has plenty of tools on board. In an emergency, hurry to the escape pods and eject! Includes 4 never-before-seen minifigures with assorted tools.

·         Marvel’s Guardians of the Galaxy Star Lord Quad Blaster by Hasbro (SRP $19.99, available July 2014): Create your own epic space adventure with the Star Lord Quad blaster! Kids can pretend to be the leader of the galaxy’s newest team of heroes with this blaster based on Star Lord’s signature weapon in the film. The Quad Blaster expands to reveal double blasters and fires four included Nerf darts.

ABOUT DISNEY’S PLANES: FIRE & RESCUE
“Planes: Fire& Rescue” is a new comedy-adventure about second chances, featuring a dynamic crew of elite firefighting aircraft devoted to protecting historic Piston Peak National Park from a raging wildfire. When world famous air racer Dusty (voice of Dane Cook) learns that his engine is damaged and he may never race again, he must shift gears and is launched into the world of aerial firefighting. Dusty joins forces with veteran fire and rescue helicopter Blade Ranger and his courageous team, including spirited super scooper Dipper (voice of Julie Bowen), heavy-lift helicopter Windlifter, ex-military transport Cabbie and a lively bunch of brave all-terrain vehicles known as The Smokejumpers. Together, the fearless team battles a massive wildfire and Dusty learns what it takes to become a true hero. Directed by Bobs Gannaway (“Secret of the Wings”), “Planes: Fire & Rescue” hits theaters in 3D on July 18, 2014.

ABOUT STAR WARS REBELS
Star Wars Rebels continues the epic tradition of the legendary Star Wars saga with all-new exciting, action-packed adventures. It is a dark time in the galaxy, as the evil Galactic Empire tightens its grip of power from world to world. As the series begins, Imperial forces have occupied a remote planet, ruling with an iron fist and ruining the lives of its people. But there are a select few who are brave enough to stand up against the endless Stormtroopers and TIE fighters of the Empire: the clever and motley crew of the starship “Ghost.” Together, this ragtag group will face threatening new villains, have thrilling adventures, and become heroes.

ABOUT MARVEL’S GUARDIANS OF THE GALAXY
From Marvel, the studio that brought you the global blockbuster franchises of Iron Man, Thor, Captain America and The Avengers, comes a new team—the Guardians of the Galaxy. An action-packed, epic space adventure, Marvel’s “Guardians of the Galaxy” expands the Marvel Cinematic Universe into the cosmos, where brash adventurer Peter Quill finds himself the object of an unrelenting bounty hunt after stealing a mysterious orb coveted by Ronan, a powerful villain with ambitions that threaten the entire universe. To evade the ever-persistent Ronan, Quill is forced into an uneasy truce with a quartet of disparate misfits—Rocket, a gun-toting raccoon, Groot, a tree-like humanoid, the deadly and enigmatic Gamora and the revenge-driven Drax the Destroyer. But when Quill discovers the true power of the orb and the menace it poses to the cosmos, he must do his best to rally his ragtag rivals for a last, desperate stand—with the galaxy’s fate in the balance.

James Gunn is the director of the film with Kevin Feige producing, and Louis D’Esposito, Victoria Alonso, Jeremy Latcham, Alan Fine and Stan Lee serve as executive producers. The story is by Nicole Perlman and James Gunn, with screenplay by James Gunn. Marvel’s “Guardians of the Galaxy” releases in U.S. theaters on August 1, 2014.

ABOUT THE AMAZING SPIDER-MAN 2
We’ve always known that Spider-Man’s most important battle has been within himself:  the struggle between the ordinary obligations of Peter Parker and the extraordinary responsibilities of Spider-Man. But in The Amazing Spider-Man 2, Peter Parker finds that a greater conflict lies ahead. It’s great to be Spider-Man (Andrew Garfield). For Peter Parker, there’s no feeling quite like swinging between skyscrapers, embracing being the hero, and spending time with Gwen (Emma Stone).  But being Spider-Man comes at a price: only Spider-Man can protect his fellow New Yorkers from the formidable villains that threaten the city. With the emergence of Electro (Jamie Foxx), Peter must confront a foe far more powerful than he. And as his old friend, Harry Osborn (Dane DeHaan), returns, Peter comes to realize that all of his enemies have one thing in common:  Oscorp.  Directed by Marc Webb.  Produced by Avi Arad and Matt Tolmach. Screen Story and Screenplay by Alex Kurtzman & Roberto Orci & Jeff Pinkner. Based on the Marvel Comic Book by Stan Lee and Steve Ditko. The film will be released in theaters internationally beginning April 16, 2014, and in the U.S. on May 2, 2014.