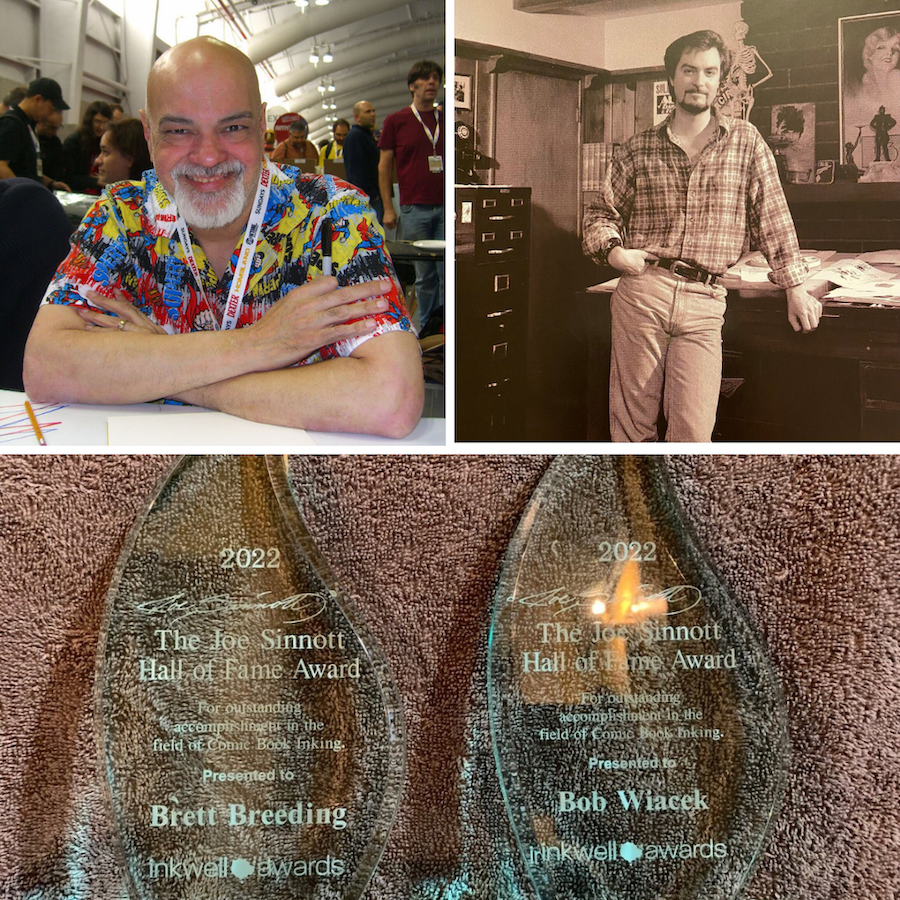 The Inkwell Awards, a non-profit devoted to promoting the art of comic book inking, has announced the winners of their lifetime achievement awards, The Joe Sinnott Hall Of Fame and The Stacey Aragon Special Recognition Award (SASRA).

“Gene was always practicing his inking style because he said an inker could make or break the comic book process. A good inker could make a mediocre penciller great and a bad one could ruin the pencils. I know I’m biased because I thought Gene was a great inker, but I believed his pencils were even better…I am very pleased to receive this lifetime achievement award, one that recognizes Gene’s work in the artform of inking. I can only wonder had Gene not died how much more he would have accomplished. I truly believe he would have reached the stars and beyond. Thank you so much!”

In December, 2021, George Pérez publicly announced that he was diagnosed with stage 4 cancer and would be living out his final months connecting with and/or visiting community friends and fans while time allows. George could not be reached for comment but Jess Harrold, author of The Marvel Art of George Pérez, made the following statement:

“This award is far from the first George has received, and it won‘t be the last, but I have no doubt it will mean a great deal to him…George knows the value of a good inker. He is effusive in his praise of those who, early in his career, made him a better artist, and those who, as time went on, were able to match him for sheer enthusiasm, hard work and painstaking detail. As an inker of other pencillers, George brings all of that to the table, with an innate recognition of comic books as a unique medium of collaboration. He will elevate your artwork to the best it can be – and you know he absolutely will not skip a single line. And when Pérez inks Pérez? Hold onto your hats…George Pérez is a true Titan.”

John Severin’s daughters, Michelina Severin Van Gemert and Ruth Severin Larenas, made the following announcement not just for John but also for his sister, 2019 SASRA recipient Marie Severin, because the Inkwells did not have contact info for the estate at the time:

“On behalf of the family of John Severin and Marie Severin we are very proud and honored to accept this Inkwell Awards SASRA lifetime achievement award for them. They were both pioneers in the comic book industry and we wish to thank everyone involved in bestowing this well-deserved award…Our Dad’s career spanned 60-plus years. He was referred to as an ‘artist’s artist’ known for his historical knowledge and accuracy, especially in western and military genres.

“Our Aunt Marie was a pioneer, being one of the first female creators in the comic-book industry; a mentor and encouragement to future women comic-book artists. Her career spanned 50-plus years…Her talent became obvious, and she began to do pencilling and inking for Marvel Comics, with a knack for caricature…She also was a colorist, artist and inker for EC Comics, DC, Atlas and Dark Horse.

“Both John and Marie Severin (Dad and Aunt Marie), despite their enormous successes in the industry, were modest and charmingly unpretentious people, who would have been both grateful and humbled by this award. Our family appreciates the Inkwells for this and we extend our warm thanks.”

Dave Stevens’ sister and trustee of The Rocketeer Trust, Jennifer Stevens-Bawcum, made the following statement on behalf of her brother:

“I would like to thank the Inkwell Awards’ nomination committee for this posthumous award to Dave. Thank you for keeping his memory alive and acknowledging the phenomenal talent that he possessed. His talent was apparent even in his teenage years without any professional training…Flawless is an understatement as I still am taken aback when I look at his work. I know that he touched many lives and inspired many to enter into the art field or continue in it when doubts crept in. He left an indelible mark on the world and we are the richer for it. Thank you again!”

This year there are two new recipients of the Joe Sinnott Hall of Fame Award: Brett Breeding and Bob Wiacek.

Brett Breeding said:
“Thank you to everyone who voted for me for this year‘s Joe Sinnott Hall of Fame Award. I am humbled and honored to receive it…I was given the opportunity to work for Joe as his background assistant, and though it only lasted a short time, it provided me the chance to meet and visit Joe…one of the biggest thrills of my early days in comics… I think of him frequently and carry a small part of him with me every time I sit at my drawing board and start dipping ink. Having an award that carries his name will be a daily reminder of this giant of a man. I could not be more honored.”

Bob Wiacek said:
“Having known Joe Sinnott since 1968, I never thought I’d be receiving an award in his name, and for that I thank you. Though there are others who deserve this award more than I, like Reed Crandall, Bob Powell, George Roussos, and Bernie Sachs, who perfected the art of inking in their own way. If not for them and many others in this business, I would not have the job I love. I must also take this opportunity to thank Dick Giordano for giving me the chance to work with him and, more importantly, for opening my eyes as to what inking is all about. Thank you, Dick, and I will never forget you.”

“We are delighted and honored to welcome the two newest recipients of the Joe Sinnott Hall of Fame award…Both have contributed so much inking talent to the comics industry throughout their illustrious careers. They both have certainly improved upon and enhanced the work of many pencillers…They both bring a world of talent and class, and are two of the nicest guys in the comics industry. I am proud to call them my friends. Joltin’ Joe would also be so proud of them, knowing that they have been selected as the newest members of this elite group. As always, keep slinging ink and never let your inkwell run dry. Congratulations on a fantastic career, Brett and Bob, and a job well done.”

Full acceptance statements and information on both awards are at the Inkwell Awards‘ website.

The Inkwell Awards is the only official 501(c)(3) non-profit organization whose mission is to promote and educate regarding the art form of comic-book inking, as well as annually recognize the best ink artists and their work. Established in 2008, the Inkwells are overseen by a volunteer committee of industry professionals and assisted by various professional ambassadors and contributors. They sponsor the Dave Simons Inkwell Memorial Scholarship Fund for the Kubert School and host the Joe Sinnott Hall of Fame Award.