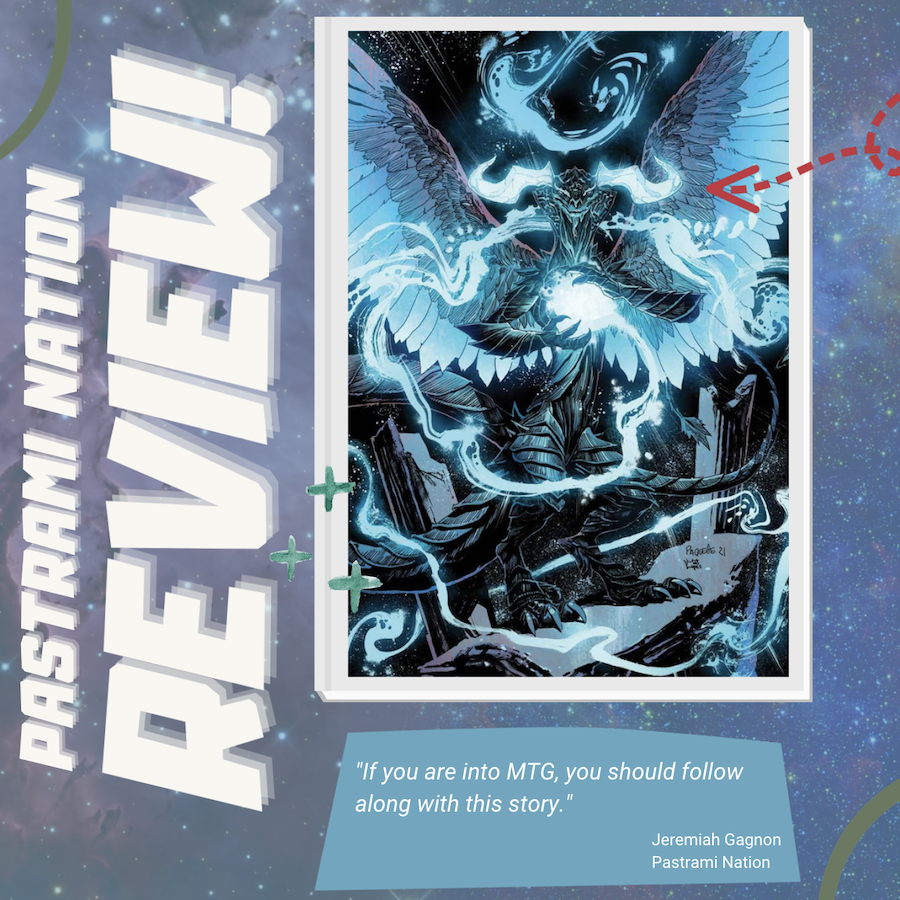 We open with the scene of the aftermath of a battle three months after it finished. The destruction scene is massive. We follow Chandra Nalaar, The Firebrand; she is a planeswalker not known for her excellent sense; as she explores what remains of The Battle of Amonkhet. As she explores the ruins and wanders about the great war machines, she hears the voices of two individuals. Tibalt, The Lord of Pain and Davriel Cane, The Spellthief. Both are also Planeswalkers and would not hesitate to kill the other if the need arose. Chandra accidentally makes a noise that alerts the two other Planeswalkers to her presents, and a battle ensues. Chandra starts strong by sending flames at the two opponents; seeing that Tibalt is a half-devil, he stands there and takes it while Devriel backs away. Tibalt taunts her; Chandra then leaps in with the old-fashioned headbutt, knocking Tibalt back a few feet.

The majority of the comic book shows the battle between four different Planeswalkers, while the last ¼ leads to a rescue mission. Chandra is out exploring the ruins of the Battle of Amonkhet though what she is looking for isn’t entirely clear, and she happens to stumble upon Tibalt and Davriel, who are up to no good. This book also features flashbacks from the past few months of Chandra’s life.

I have been playing MTG off and on for a few years now, and while I read it, things felt similar to how a match would go. I’ve always imagined two wizards over a battlefield summoning different types of cards to attack the other wizard. The two wizards being the players, and the cards being the tools used to attack the other wizard. In this case, the wizards are invisible, and they are trying to tell a story. We start with one wizard using Chandra to explore some ruins while the other wizard uses Tibalt and Davriel to act out some nefarious plan. Chandra accidentally exposes herself, and just before she is taken out of battle, the wizard controlling Chandra summons a new combatant. Due to summoning sickness, something that happens to most cards when they are first brought into the fray, he cannot attack immediately, but when he does attack, he causes the wizard controlling Tibalt and Davriel to form a new plan. I like how whenever we are introduced to a new Planeswalker, it feels as though they were just summoned, and it works since this is a Magic The Gathering story. Had this happened in some other kind of universe, it might have felt like the writers were bringing in pointless characters to save the protagonist. When it comes to Chandra, I like how her fire powers aren’t just a magical means of her attacks, and they feel like they are part of who she is. In other stories I have read or watched, the character who uses fire often suffers a negative effect, such as losing their hair or their clothes burning off. It’s cool to see Chandra use her fire and see her hair turn into flames, and you know things are about to get real when she does this.

While their use of colors and detail is excellent, the colors themselves felt slightly washed out and not as crisp as I would have preferred. Also, it seemed like not a lot happened. The majority of this book is about a short fight. I would have liked to see Chandra explore the ruins more, even seeing the remains of fallen comrades. I love a good battle, but this battle wasn’t all that exciting, nor did a lot happen. As nice as it was to see some flashbacks and get a little history on Chandra, I would have preferred to wait for another time so we could get more of the action and exploration. Shortly before it ended, there was also a part that seemed to come out of nowhere and was just there to pad the length of the book. The book’s final part was underwhelming, almost as if they were just teasing us. It started out cool but ended very quickly.

Overall this book is fine, and I’m sure that once they create a graphic novel, the parts I don’t like won’t be an issue. It would be cool if they later put in a battle that feels more like an MTG game. If you are into MTG, you should follow along with this story. It also has some Dungeons and Dragons feel to it, which is nice for D&D players like me. It would be interesting if they ever did a crossover with D&D too. I hope to see great things from this series and look for future comic books featuring Magic The Gathering.

Jeremiah Gagnon is a happy-go-lucky goofball of a guy with a passion for all things Superheroes, D&D, and Comic Books. Gagnon is an amateur Magician as well. He currently lives in New Mexico. You can follow him on Facebook, YouTube at PressXForAwesome, Instagram @unicyclezombie, Soundcloud, and TikTok @magic_man95