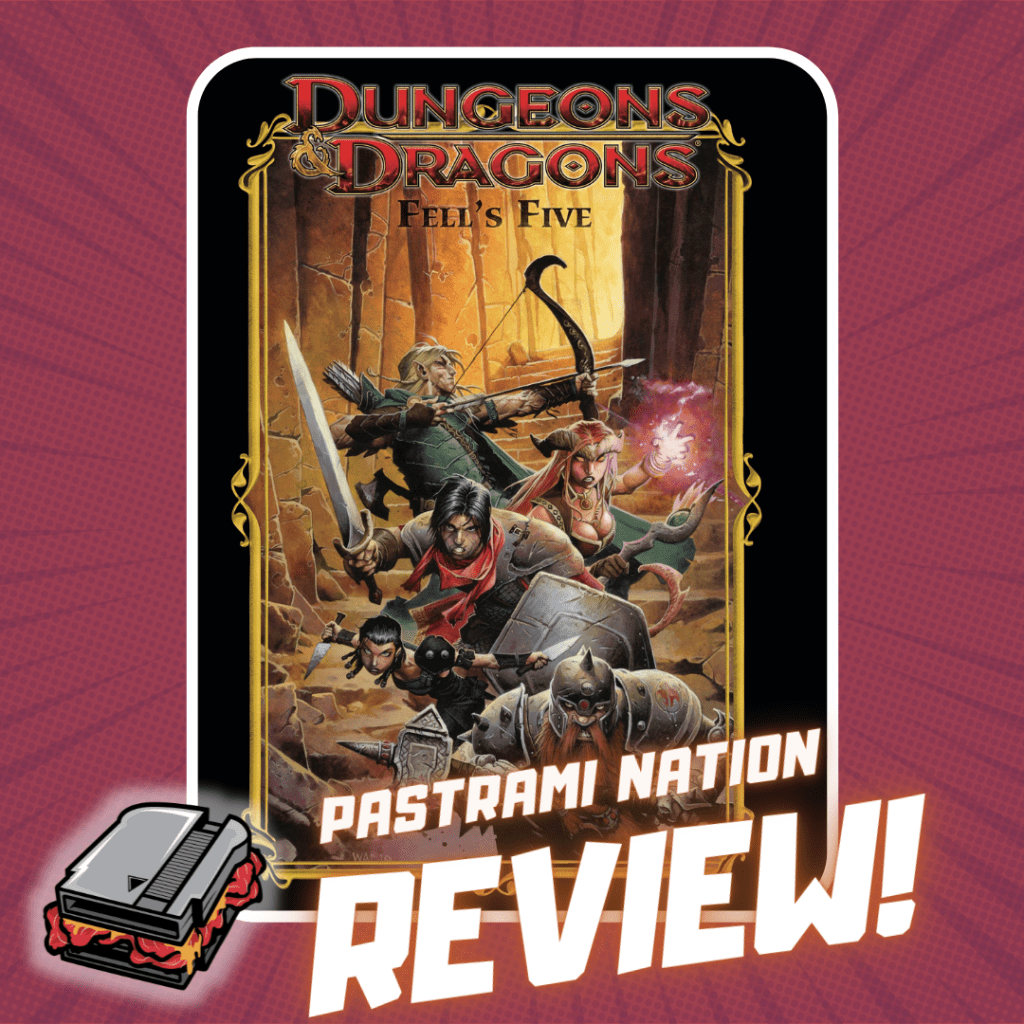 For today’s review, I look at Dungeons & Dragons Fell’s Five from IDW Publishing.

The book opens with a human and a dwarf crashing through a door; the human is trying to describe the plan when they run right into a pack of monsters that need slaying. Khal, the dwarf, yells out a catchphrase and starts singing as he swings his battle hammer. With a beast upon him, Adric Fell, the human yells for his third companion Bree Three Hands, who looks to be a halfling, to help fend off the beast. Bree searches for loot on the bodies of their fallen foes as the other two head down the stairs. After a bit of walk later, they come to a door with runes written on it telling them they have reached the Underdark. Just after entering through the door, their elven comrade Varis who apparently took a shortcut, or as he refers to it, an “ancient path.” Varis tells the rest that he found the bandits they have been looking for, but there is an additional problem, the bandits have a group of slaves. Adric knows what he and the rest of the group need to do, and after thinking for a moment, they all rush in to rescue the people. After defeating the bandits, a Teifling named Tisha starts talking to them about the “traders” and asking what trades for slaves down in the Underdark. That is when an Adult Black Dragon flies in spewing acid…

The rest of the comic book consists of a few different adventures, those of daring, those of love, and of course, risking one’s life to save the world. This is easily my favorite D&D comic book that I have ever read! The artwork is fantastic to look at with all the detail you need, and the colors were chosen correctly and make sense. No character is over-sexualized or hulked out on muscles. Every character is believable, and they each have their own motivation. While the stories they tell aren’t precisely new types of stories, the way they are told and the actual adventure is like something I have never seen before. This is a zombie killing, plane hopping, big bad monster set of adventures. Nothing feels sped up to fit in this book, and at over 400 pages long, I would hate for them to speed through one adventure to get to the next. Everything feels natural, and as always, I get the feeling I am reading an adventure that someone else played, and I love reading and listening to other people D&D adventures; there is a reason why it feels this way, which is also the main reason why this is my favorite Dungeons and Dragons comic book. At the very end of the book are a series of modules of most of the same adventures that I just read; this means that I, was a Dungeon Master could take a group through the same adventures Adric and his band of adventurers went through. It’s all written out just like an adventure I would read in one of the Wizards of the Coast D&D sourcebooks. When I saw this, I got as giddy as a schoolgirl. Even better, Player Character sheets of the main group and other characters are included so I could essentially recreate the same adventures I read about with the same cast of characters. There is even a Glossary for some of the monsters that are fought from the comic book. This book is more than just a comic book; it’s an adventure book with examples of how each adventure might turn out.

On top of that, they show several pages of artwork, and they all look fantastic! The main characters are very well written, and they do not stick to the norms of what people normally think when they imagine Dwarves, Humans, Halflings, Elves, and Tieflings. Khal, the dwarf, is a poetry-loving Paladin who attempts to bring proof of his god’s calling to his clan. Adric, the human, is a fighter who works as an adventurer for his job. Bree is a halfling who loves stealing and murder; she would rather kill someone and rob a recently slain foe than try to talk her way out of a situation. Varis is an elf from the Feywilds who was banned from his village and works with Adric. Tisha is a Tiefling Warlock secretly looking for her sister and trying to be different from the stereotypes of her race. The banter between each of the various characters works so well, and they mesh well together as a group of people. No one tries to outshine anyone, and no one attempts to betray the others. We even get to learn the background of some of the characters.

They also had a few things that didn’t work for me with all of the great things they did. There were times when the party would be split, and it wasn’t exactly clear which panel regarded which half of the group; sometimes they would put two panels side by side, one for one half, and the other for the other half, and it felt a little confusing at times. Within the first few pages, we are introduced to Varis, who happens to appear out of nowhere. The group at this point has just gotten into the Underdark, a place that is hard to get to, but somehow Varis found another way to travel down there and arrive near the group. When I read this, I imagined the player sitting at the table who played Varis, arriving late to the game. As a way for that player to still play in this session, the Dungeon Master shoehorned in that the elf knew of alternative methods (shortcut) to enter the Underdark, that would work if you were playing at a table, but for a comic book, I think it is a little odd to use as an introduction. The elf could have used some teleportation magic or a magic item, but we are never shown that Varis knows any magic or has any magical items. If this were to have happened in a story, why wouldn’t Varis share his knowledge with the rest of the group to all stick together? They also brought in a side plot but didn’t resolve it, which leads me to believe that it wasn’t in any way related to the main story or it will be resolved later; it would have been nice if they would have ended it with a cliffhanger for anticipation for another comic book with this same group. The only other real issue I had would have been during one of the final encounters, they used a high challenge rating (CR) monster, yet it didn’t do very much.

At the very start of this comic, there is an entire page detailing how the writer came up with the idea for this book; it felt similar to reading through a regular D&D campaign book.

It was creative and offered a look into the creative process that we don’t usually get. It is a good read for those who like to know the inspiration behind what they are reading, however for me; it would have been nicer if they shortened it to a few paragraphs or had left the entire page at the end. It felt like they were giving a behind-the-scenes look at the story before telling the story, like when a friend goes to tell a story but then spends several minutes explaining the origin of the story.

Overall, I loved this entire book! From the interactions with the characters to how they see and experience the world. The scenes were well put together, and the story that was being told was written well. The entire time I felt like I read the adventures from a real table just without any of the dice rolling or out-of-game talk. This book is for sure a book any D&D player and especially any Dungeon Master should add to their collection. I, for one, really want to play out the adventures depicted in this book and see what another group of adventures will do.