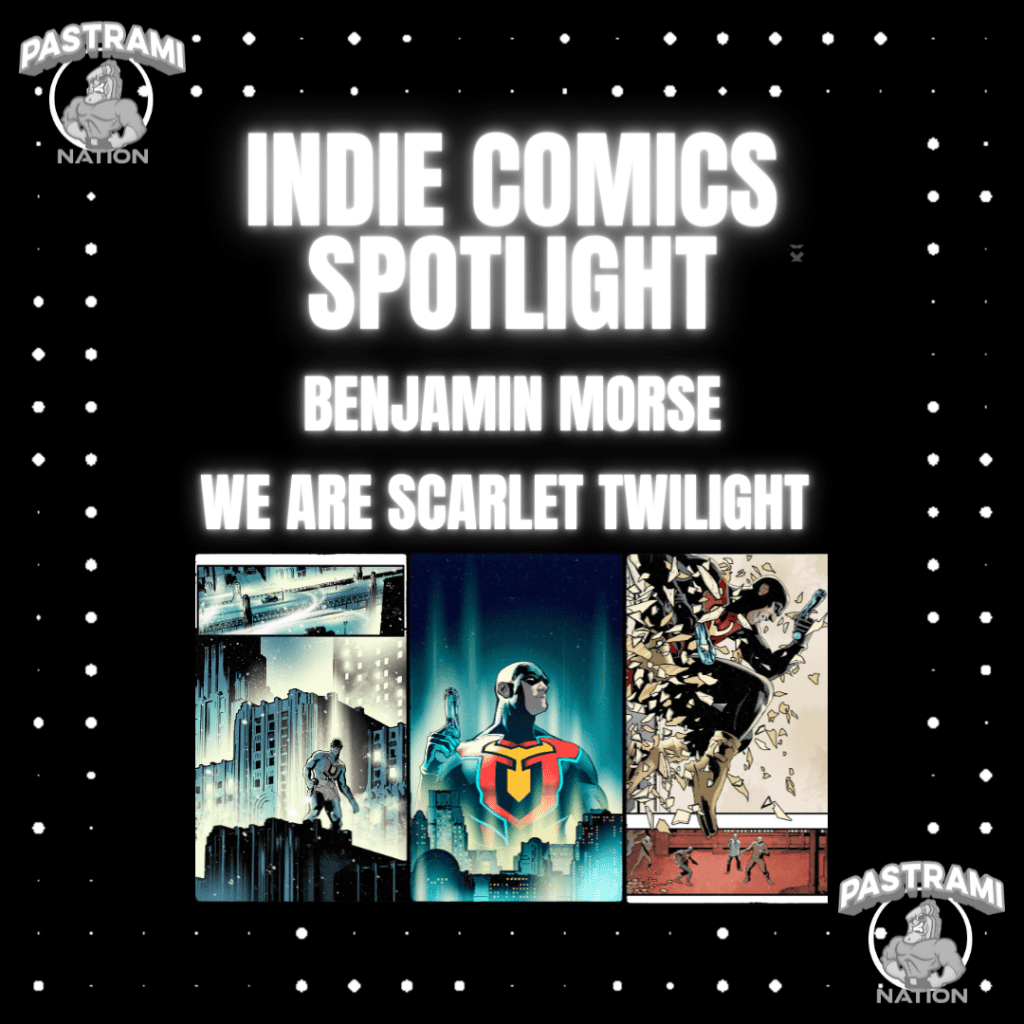 Welcome to Pastrami Nation’s Indie Comics Spotlight! We hope to help spread the word of amazing independent works with our comics and creator spotlights! With this installment, we shine the spotlight on Benjamin Morse and his current Kickstarter project, We Are Scarlet Twilight.

Benjamin Morse: “I’m an artist/writer from Ohio- I run a small art and video studio and have been doing comics on the side for as long as I can remember! My previous book, a space opera called August: Purgatory Underground is completed and coming out soon with Action Lab, and my current project, We Are Scarlet Twilight, is on Kickstarter now at this link: http://kck.st/3cmWfRx.”

“We Are Scarlet Twilight is the story of Captain Lancet, a classic pulp crime-buster who accidentally turns his arch enemy into the most powerful being on the planet- all before falling into a coma for hundreds of years. When he wakes up in a Fritz Lang’s Metropolis, art deco-inspired future, he’ll need to find a way to fight back against his now nearly invincible nemesis.”

Benjamin Morse: “I’ve been trying to draw comics as long as I can remember! I’ve had a few near misses over the years with mid-size publishers and have done a few short runs with smaller publishers, so I’ve been bouncing around here and there. It’s really only in the last few years that I think my style has come together into something that works, and I’ve gotten fast enough to sustain some at least semi-regular output!”

“Over the last 7-8 years, I’d been developing August: Purgatory Underground and pitching that and some other books to indie publishers while working up samples.”

Benjamin Morse: “My biggest influence, overall- not that it really comes through in the visuals, is Al Williamson. His art, aside from the textures and technical excellence, always had a great atmosphere- a consistent one, even from writer to writer. There’s kind of a viewpoint to his work- and how he approached heroes, villains, landscapes, and spaceships that really connected with me as a kid, and still does!”

“Other than that, I’m very influenced by Stuart Immonen’s work. Across the board- draftsmanship, design, acting… you name it- he’s just on another level from everybody else.”

“New Frontier and the rest of Darwyn Cooke’s work is a huge inspiration in my layout and storytelling decisions. His work always managed to be incredibly cinematic.”

“In terms of rendering, Adam Hughes and Alex Ross are a giant influence in how I color- and how much rendering I leave to be done by the color versus lineart. Beyond that, the texture and energy of Jim Lee and Scott Williams’ work is something I’m always looking at in the drawing and inking stages. Looking at scans of their original art from Hush or For Tomorrow, I’m always inspired by the depth they give the figures and backgrounds, the weight the characters have- all while being as dynamic as I think any comic has managed to be!”

Benjamin Morse: “Well, there are a lot!”

“I have three more stories with my space opera protagonist, August, tightly plotted out that I hope to be able to do if the first book, Purgatory Underground is a success. If I have a dream project- some primary thing that I really hope I can hang my hat on, August and his adventures is it! And I have a take on King Arthur I’m excited to do someday- probably a few years from now when Once and Future and the rest are finished! I’ve got a few other short story ideas and a longer sci-fi epic I’m putting together piece by piece in a plainer Moebius-inspired lineart style. Hopefully, someday I’ll get a shot at getting those out there!”

“Additionally, it’d be a dream to work on a Superman or Batman book someday, and I’m a big Captain America fan as well. I’d love to have a go at those characters and combine some of the atmospheres of the old Fleischer Brothers cartoons and Golden Age comics with today’s take on those characters. Those three have only seemed to get more iconic over time- and I think doing something that really highlights how long they’ve been with us plays up the contrast in visuals we’re used to today with some cool throwback elements here, and there would be a lot of fun and have some impact.”

“I’m sure I’m not the first person to think that about those characters or want to do it- but I hope someday I get to grab my bat and step up to that plate!”

“Anyone wanting to see a little more about August can see the art on my social accounts above and a trailer here: “

“And of course, my We Are Scarlet Twilight Kickstarter is live between now and Sun, April 25th!

Make sure to support We are Scarlet Twilight today on Kickstarter at http://kck.st/3cmWfRx.