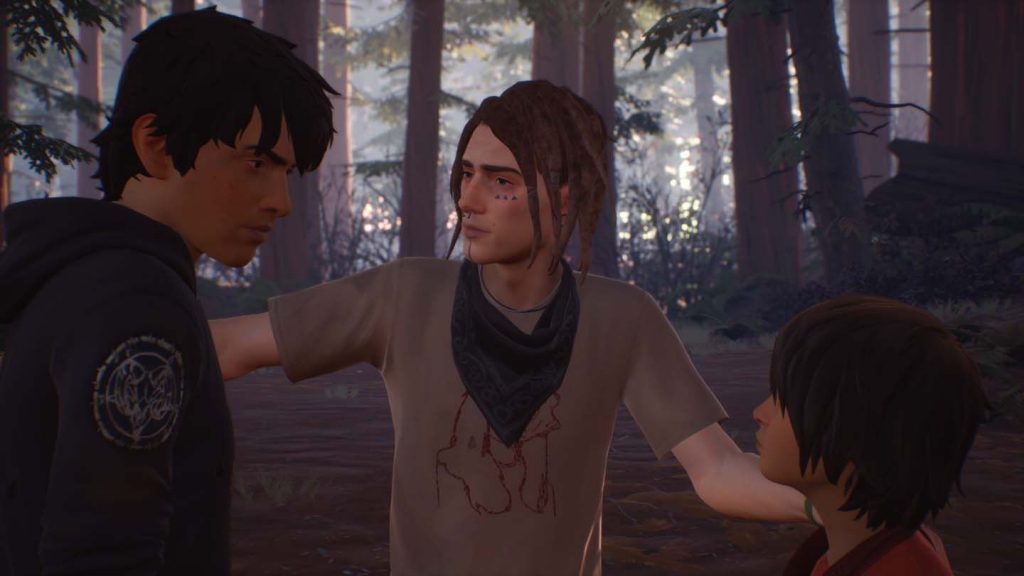 There will be plenty of spoilers ahead! You’ve been warned!

Episode 3 takes place many weeks after the last, where Sean and Daniel were forced to run away from their grandparent’s home. Now they are part of a community of vagabonds living out of tents in the forest. Finn, the hippy leader of this camp of misfits, has taken a liking to Daniel, and Sean engages big-bro jealousy mode.

After a bit of exploring in the camp, it’s time to go to work. The community is picked up every morning by a guy unironically named Big-Joe, who’s packing some serious heat. The band is whisked away to a pot farm for hard manual labor, and it quickly becomes apparent that something is very off about this place. Finn, Sean, and the rest of the community are treated like garbage, even physically abused when orders aren’t followed, or they speak out of turn.

Back at the camp, Sean helps Daniel train his abilities, and I was amazed at just how much power this little kid has developed since the last episode. Before he had trouble moving snowballs around, now he’s lifting entire fallen trees with ease! That being said, It’s becoming apparent that his power is getting to him. His anger seems to be growing in strides right alongside his destructive capabilities. He even mentions that “Something is growing inside” of him…

At night the whole group gathers around the campfire to swap tales of woe, and each sad backstory is created well but delivered poorly. I did grow fond of each and every one of these new characters but also hated most of them at the same time. Their lines are more cringe than comedy, and like the last episode, voice acting has taken a real nosedive.

Morning comes, and it’s time for work back at the farm. Daniel gets into mischief and ends up costing the brothers their jobs, as well as receiving a bit of physical punishment. Daniel isn’t about to stand by and let it happen though, so, in front of everyone, he decides to use his powers.

As expected, the House of Happy Hippie Hipsters has a small falling out when they discover Daniel is superpowered. Some want to steal from the asshats who run the pot farm and exploit them for labor, while others justifiably think that robbing armed criminals with no weapons, and only a 9-year-old boy as defense, is actually a somewhat terrible idea.

Either path you take leads to the same place, but how you come out the other side of the long dark tunnel that is the ending of “Wastelands” will significantly depend on the choices you made throughout the chapter. The main reason we play this series is to watch how our decisions can significantly affect the ending of the story, and this episode didn’t disappoint in that regard. Where it did disappoint was in the unchangeable responses.

I found myself upset at Sean multiple times for how he would suddenly snap at his little brother, even after I had just chosen a dialogue option trying to reason with the kid. It made my choices feel hollow like they had little effect over Daniels attitude or outlook on situations. The writers wanted the brothers to be angry at one another, and regardless, that’s how it was going to be.

One technical problem that quickly bothered me was the communal dog. You pet him once, and he won’t leave you alone. Usually, I’m cool with four-legged friends tagging along, but his AI is about as smart as, well, a dog. He bumps into things and hangs out in from of the camera during cut scenes, blocking out the story.

A literal truckload of new characters was introduced, all of them unique. However, because the episode spent so much time focusing on these new characters, trying to flesh all of them out, there was little in the way of exploration or puzzle solving. The writing seems to have hit it’s lowest point, becoming borderline cringy. Life is Strange has always been known to be a little cringy, with its teen angst filled scripts, seemingly written by old people who have no idea what kids are saying these days.

The atmosphere upheld that outstanding “Life is Strange” quality it is traditionally known and adored for, with a fantastic cliffhanger of an ending that leaves you begging for more. Music has always played an important role, and this time around, we have some great tracks provided by the Gorillaz.

I was a little disappointed by the slow pace of the last episode, and with this one continuing to let me down, I find myself a bit worried for the future of this season.

I give Life is Strange 2 Episode 3 “Wastelands” a 7 nude campers out of 10. Oh yeah, there is nudity now. That happened.