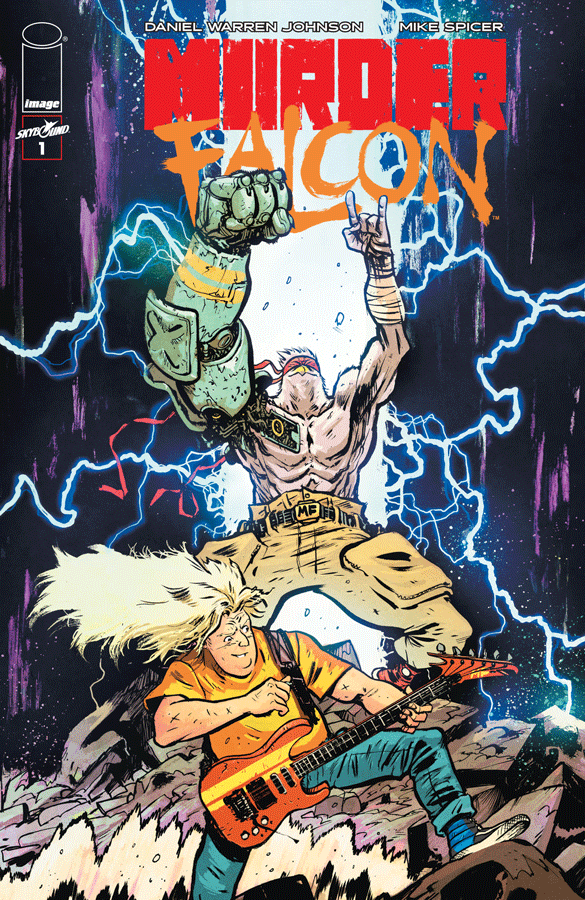 Welcome to the over the top, heavy metal, 80’s inspired action love letter that is ‘MURDER FALCON.’ Murder Falcon is written and drawn by Daniel Warren Johnson, published by Image Comics and is fantastic.

Almost immediately you are put into a world of danger, action and monsters appearing and attacking the populace, our conventional means of defense useless such a threat… How can we stop such a force?

Well, how about the power of Metal? Wielded by the hero of our story, ‘Jake’ A stout blonde haired man, hair-long like many great metal-heads before him. Well, how can music defeat this threat? A strum of his red and orange electric guitar creates a spark of lighting; these sparks cleverly create words you can see if observant enough. These sparks summoning ‘Murder Falcon’ our titular character, a mish-mash of 80’s action heroes, a red headband (Rambo) the face of a literal falcon, his appearance from a flash of light and smoke (The Terminator), brown cargo pants, and a belt with his initials adorned his buckle. *MF the name I will be using to help with time* MF has a truly unique design that can only come from the mind of Daniel Warren Johnson. Let’s not forget the most obvious design choice, his sizeable robotic right arm, amazing.

Together our heroic duo battle the forces of evil, But… It wasn’t always this way. On this quest two weeks before our heroes grand entrance. We see Jake without direction, defeated… and the worst of this…Loss.

His wife, his band, guitar-one he smashed during one his shows, and those close remaining friends that he keeps at arm’s length, his choice to remain alone obvious, a lonely home full of memories, his broken guitar beyond repair lying in a dark corner. A perfect metaphor of his own life, it seems like nothing could make his life harder… well maybe a giant spider-like monster attacking him in his home, Jake in his defense reaching for the nearest object his guitar, hoping for a miracle… In a flash of light, the guitar repairs then bring forth MF to his rescue. Another purpose to this MF delivering another 80’s trope for exposition as to why he comes to him, he chose him. A confused Jake still doubtful and worried his concerns make him unworthy, Mf shuts this down, confirming his reasons as for why he chose him. His kind heart, resilience and musical ability. Together this odd duo work together to expel the forces attacking Earth by the stories main antagonist ‘Magnum Khaos’ using something called the tear to bring these beasts from a planet named ‘Veldar.’

Murder Falcon tells an interesting story inspired by numerous films and anime. The most obvious Pacific Rim, alas the monsters appearing and attacking the population, no conventional means of defense, and a breach(the tear), but done right. The pacing quickly puts you into it, the story slows down midway with it trying to make us feel for our hero, but then picks up almost right after. The artwork doesn’t stop, Daniel Warren Johnsons’ art is magnificent, his ability to draw monsters is second to none, his direction to action, you can feel the love this man has put on paper.

So do yourself a favor and READ MURDER FALCON!