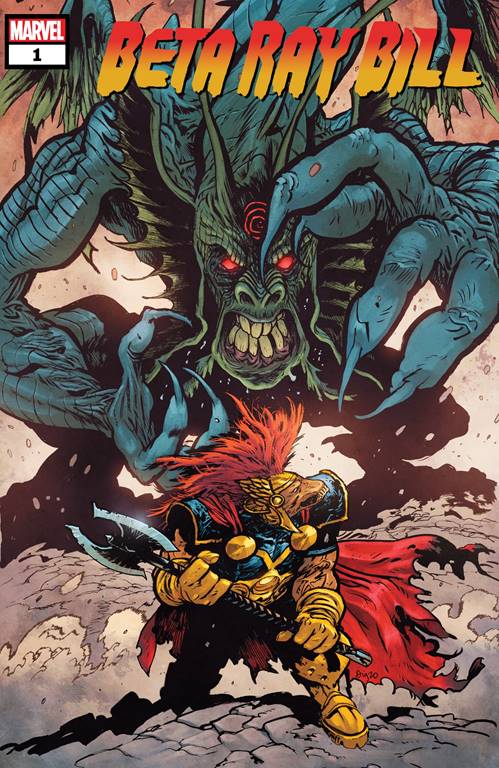 NEW BETA RAY BILL SERIES SPINNING OUT OF THOR AND THE EVENTS OF KING IN BLACK!

Beta Ray Bill recently made a thunderous appearance in the pages of Donny Cates and Nic Klein’s epic run on Thor. Now, the former Mjolnir wielder will get a brand-new limited series written and drawn by superstar creator Daniel Warren Johnson (Wonder-Woman: Dead Earth, Murder Falcon, Extremity)! BETA RAY BILL will begin a new saga for the worthy alien hero, spinning directly out of the events of Thor and King in Black.

“I have known Dan for almost a decade now,” Cates said. “We both got our start together a long time ago on a crazy little book called Ghost Fleet, and I knew all those years ago that I was absolutely “marrying up” in regards to an artistic partner on a book. Dan is brilliant. Pure and simple. He’s just built differently. He’s not the same species as the rest of us mere mortals. And if you went back in time and told me that Dan and I were both now playing in the world of Thor like this, the only thing that would surprise me is that they let me in to play as well. This Beta Ray Bill book that Dan has built is special.  And beautiful and heartfelt and chainsaw-razorblade-guitar-riff-to-your-bones metal. It is, in fact, what I always knew Dan would be doing. I couldn’t be more proud, and more excited, for him to unleash this book on you. You aren’t ready.”

Beta Ray Bill is tired of playing second fiddle to Thor – and with Beta Ray’s famous hammer, Stormbreaker, recently destroyed at the new All-Father’s hands, tensions are higher than ever. The mighty Korbinite must strike out in search of a new weapon…and a new destiny. Assuming he can first defeat a Knullified Fin Fang Foom! Joined by colorist Mike Spicer, Daniel Warren Johnson will take Beta Ray Bill on a journey beyond the shadow of a god!

“Beta Ray Bill is literally my favorite Marvel character, so it’s a dream come true, and there are images in this book I’ve been wanting to illustrate for years. It’s even more exciting that I get to write this series in the context of the current Thor universe,” Johnson said. “There’s a lot to unpack with Beta Ray and I can’t wait to share my story with you all.”

Nolan Smith
0
Tags :
NEW BETA RAY BILL SERIES SPINNING OUT OF THOR AND THE EVENTS OF KING IN BLACK!