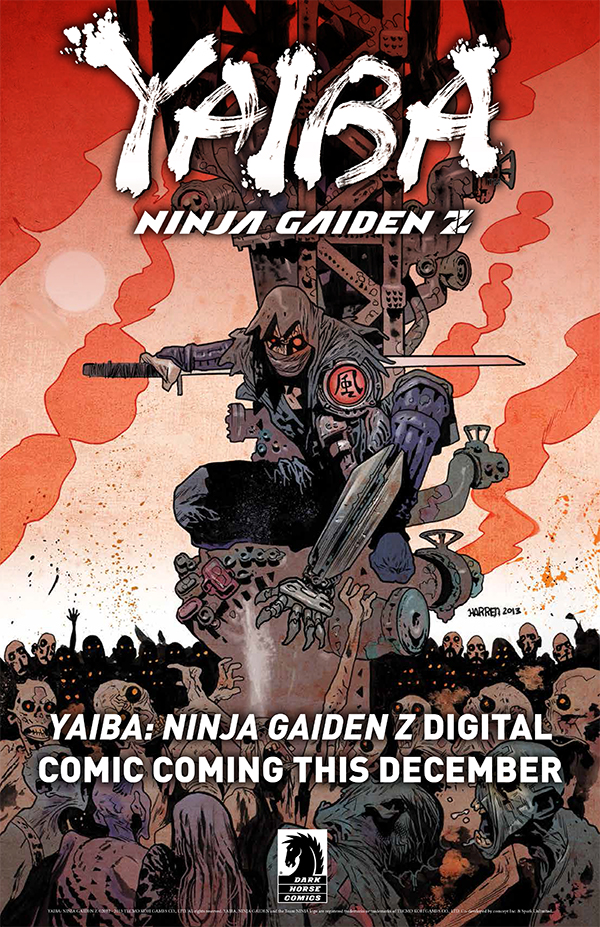 (NEW YORK)—Dark Horse Comics is thrilled to announce a team-up with famed developers Keiji Inafune and Team Ninja! Fans will be introduced to the world of Yaiba: Ninja Gaiden Z with an all-new digital comic revealing essential pieces of this upcoming game!

The three Yaiba: Ninja Gaiden Z comics will be available for free download from the Dark Horse Digital Store at Digital.DarkHorse.com and through the Dark Horse Comics app (available through iTunes and Google Play).

An all-new, full-color print comic will also be available when the Yaiba: Ninja Gaiden Z video game arrives in early 2014.

In Yaiba: Ninja Gaiden Z, players will battle fierce zombies as Yaiba, a cyborg ninja who will do anything to get revenge and stay alive. After being cleaved in two, he is brought back to life with cybertechnology. Brandishing his ninja sword and the mecha weapons in his cyborg arm, he slaughters zombies with brutal, over-the-top abandon.

Step into Yaiba: Ninja Gaiden Z, where stunning graphics depict a world gone mad. Hordes of undead can only be stopped by Yaiba’s willingness to use any means necessary to get the job done. Will he kill by turning his cyborg arm into a razor chainsaw for slicing up the undead—or just rip off an opponent’s arms to use as zombie nunchucks? Both possibilities fill Yaiba’s heart with twisted laughter—and the desire to kill more and more zombies!

For more information about Yaiba: Ninja Gaiden Z, be sure to check it out at YaibaNGZ.com, on Facebook at Facebook.com/YaibaNinjaGaidenZ, and on Twitter at Twitter.com/YaibaNGZ.

A unique collaboration project between Team Ninja and comcept founder Keiji Inafune, published by Tecmo Koei America, Yaiba: Ninja Gaiden Z will be available for the PlayStation 3 computer entertainment system, the Xbox 360 video game and entertainment system from Microsoft, and Steam for PC in early 2014. This title has not yet been rated by the ESRB.

About TECMO KOEI AMERICA CORP:
TECMO KOEI AMERICA CORP. is a publisher of interactive entertainment software for current generation consoles, handhelds and digital download content based in Burlingame, California. The company is a wholly owned subsidiary of TECMO KOEI HOLDINGS CO., LTD., headquartered in Yokohama, Japan. TECMO is best known for the Dead or Alive®, Ninja Gaiden®, Tecmo Bowl®, and Fatal Frame® series. KOEI is best known for its Dynasty Warriors® and Samurai Warriors® franchises. On April 1, 2009, TECMO KOEI HOLDINGS CO., LTD was established as a result of the TECMO, LTD. and KOEI Co., Ltd. merger.

Xbox, Xbox 360 and Xbox LIVE are registered trademarks or trademarks of the Microsoft group of companies.

“PlayStation” is a registered trademark of Sony Computer Entertainment Inc.