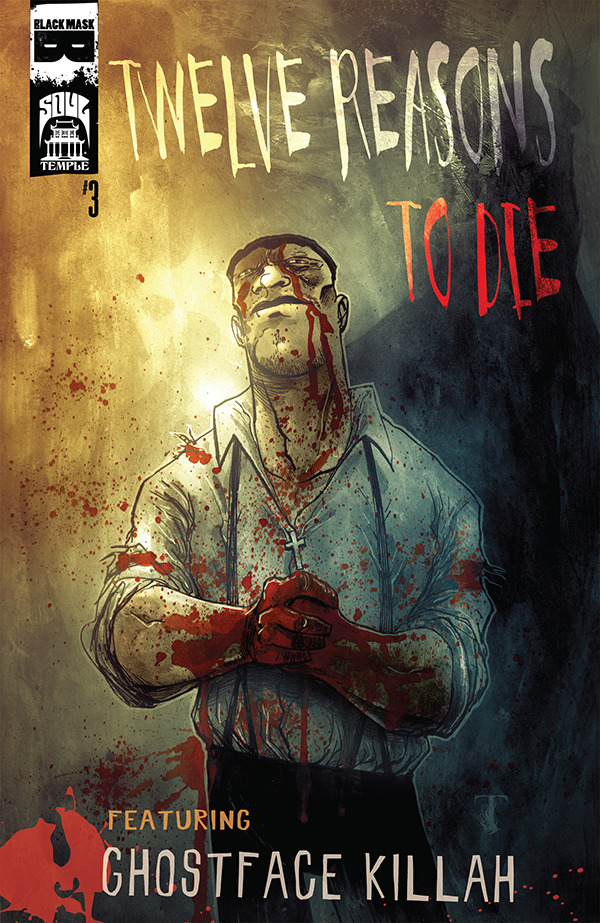 Black Mask and Soul Temples gangster horror story 12 Reasons is gangster, homie, and I do not say that lightly. My favorite series this year is 12 Reasons to Die. The reason why is because this story hits hard like the beats from its self titled album, 12 Reasons. Since the first issue I was delightfully wrong off my first impression. See, a good story has substance and intrigue and this has that and whole fucking lot of murder.

In this issue you continue to see the breaks in the notorious twelve and Anthony Starks relationship. The idea of him becoming one of the twelve, we start to see maybe that is not his plan. As members of the twelve began to turn on each other and using Starks as the wrench, you can start to see what his intentions truly are. Mr. Migdal continues on his quest to obtain the mysterious records. Poor guy, man, he has to put up with so much crap, I hope he gets paid well for his services. Anyways he obtains two more records and the need for a butt-load of new therapy

Like its self-named record, 12 Reasons to Die continues to be the series to watch. Yeah it may be a little, ok a lot, on the violent side, but who cares; this is something fresh. The artist truly shows you the fear in each person eyes as they meet their demise. Ghostface Killah: see what I did there? Get at me, Man. On the real, all that aside, this series is truly something great. The story is edgy and embodies the beloved slasher-movie-type feel. I definitely see movie potential in the future of this franchise. Like the Candyman of the 2010’s. But readers, this issue, like the rest of the series, hits on every level. For a horrifically good time pick up “12 Reasons to Die” issue three you’ll be glad you did. Pastrami nation Scale is a Five as said before this Shaolin keeps it Wu.  Till next time cheers!