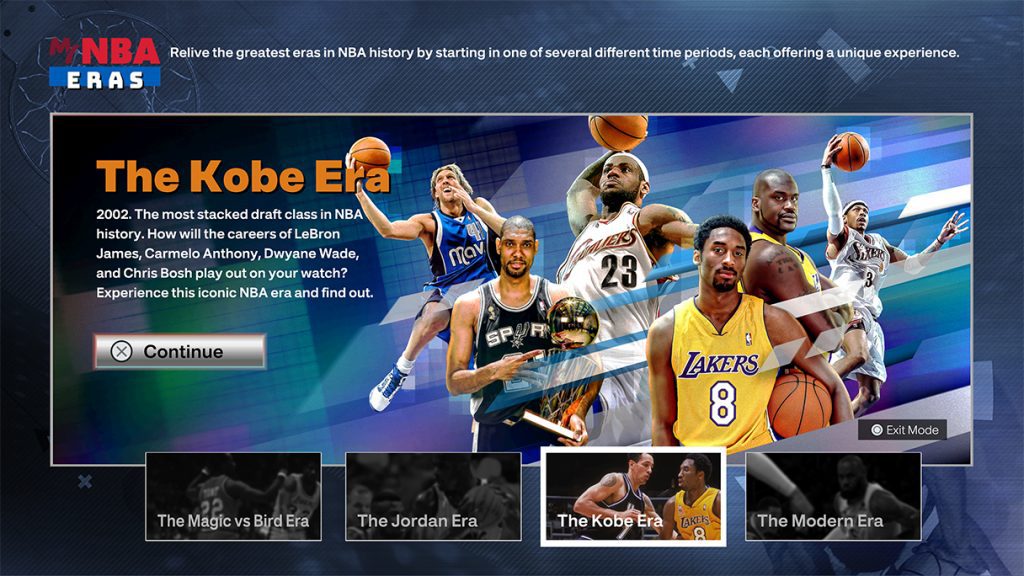 “This is a banner year for MyNBA, and our team is incredibly excited for fans of the game mode to explore the changes that have been in the making for over a decade,” said Erick Boenisch, VP of NBA Development at 2K and Visual Concepts. “MyNBA Eras takes the in-depth MyNBA experience of years past and plugs it into some of the most iconic periods of the NBA, allowing players to explore endless ‘what if?’ scenarios in the most authentic way possible.”

MyNBA provides players with a time machine that allows them to start a new MyNBA save at a specific point in NBA history called an Era. Players can play through solo, or join up with friends and choose to either relive or rewrite key moments, including:

–The Magic Vs Bird Era: Starting in 1983, players will find themselves in the heat of the Magic Johnson vs. Larry Bird rivalry that took over the league. Fans can rewrite 1980’s NBA history while they compete to draft the likes of Michael Jordan, Akeem Olajuwon, or any of the other NBA legends who were drafted in that legendary decade;

–The Kobe Era: The Kobe Bryant era takes fans back to 2002, where a new generation of talent had emerged in the West, including Tim Duncan and the San Antonio Spurs, Kevin Garnett and the Minnesota Timberwolves, Dirk Nowitzki and the Dallas Mavericks, and of course, the Black Mamba himself, Kobe Bryant. In addition to competing against the legends of this era, players will also be fighting for draft position in anticipation of the legendary 2003 draft class;

Each Era received a variety of updates to recreate the atmosphere of the times. Every team has at least one unique court along with unique uniforms. Additionally, a specific filter system was intricately designed to recreate the television experience of watching these games as they were originally broadcast, and every expansion team and franchise relocation is accounted for in-game.

For full details on the new MyNBA updates coming to NBA 2K23 for PlayStation 5 and Xbox Series X|S consoles, check out the latest Courtside Report. Stay tuned for additional deep dives in the coming weeks to reveal even more of what’s new in NBA 2K23.

NBA 2K23 is currently scheduled for release on September 9 for PlayStation 5 and PlayStation 4, Xbox Series X|S and Xbox One, Nintendo Switch, and PC platforms.