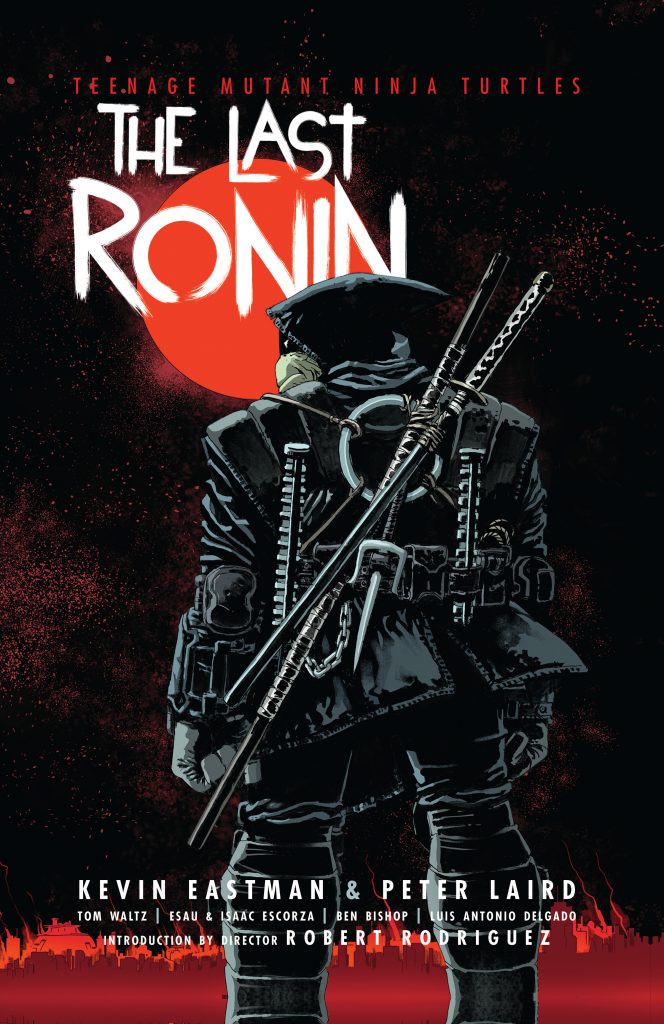 Teenage Mutant Ninja Turtles: The Last Ronin, the heartrending revenge story of the last surviving Ninja Turtle, continues its unparalleled trajectory of success! IDW, in partnership with Paramount Consumer Producers, announced today that its hardcover collection, originally released in July, has made the New York Times bestseller list and is tracking for a complete sell-out of its ambitious 60,000-unit print run within its first six weeks of availability.

For those concerned about getting their hands on the biggest graphic novel release of 2022, never fear! In an unprecedented move by a comic book publisher, IDW has ordered a massive new printing of the hardcover to the tune of 100,000 units, with the first wave of these freshly printed beauties arriving in mid-September.

Springing from a lost 1987 storyline by TMNT co-creators Kevin Eastman and Peter Laird, The Last Ronin tells the story of a sole, shrouded Turtle in a dark possible future, undertaking a seemingly hopeless mission to obtain justice for his fallen family and friends. The kinetic layouts from Eastman, atmospheric illustrations from Isaac and Esau Escorza and Ben Bishop, a thrilling script full of surprises from longtime TMNT scribe Tom Waltz, and bold hues from colorist Luis Antonio Delgado instantly resonated with fans and critics alike. Debuting in October 2020 as a quarterly periodical in a prestige oversized format, The Last Ronin took the comic world by storm, eventually leading to over 840,000 units of the individual comic books in print and adaptations to action figures and statues.

“When Kevin first came to me with the idea of adapting his and Peter’s 1987 outline into what became The Last Ronin, I was pretty sure our story had the kind of evergreen legs necessary to be an extremely popular addition to the long-running and multi-faceted TMNT lore. But I never anticipated the immense sales and critical success it would generate,” says Waltz. “Its popularity has already gone far above and beyond my initial expectations, and I count myself lucky to have been able to be a part of the amazing team that brought it all together for the many fans and retailers who have so quickly and consistently embraced the Ronin-verse. And the craziest thing of all is that we’re just getting started!”

Spurred by the extraordinary performance of The Last Ronin, IDW recently announced a prequel miniseries, Teenage Mutant Ninja Turtles: The Last Ronin–The Lost Years, with its debut issue slated for a December release. Reuniting Eastman, Waltz, and Bishop, and adding artist SL Gallant to the roster, The Lost Years digs deeper into the world of the Ronin-verse, adding breadth and scope to one of TMNT’s most ravenously devoured entries of all time.

“From the very start, The Last Ronin has consistently exceeded expectations,” says publisher Nachie Marsham. “Its gripping concept unearthed after three decades, the passion and mastery of craft as executed by the entire creative team, the unwavering faith of IDW staff and our partners at Nickelodeon in the project, the unbridled intensity of fans and heartfelt support of retailers, the universal acclaim from critics—it’s been a joy to watch The Last Ronin unfold, and I’m looking forward to even more readers getting the chance to dive into this story and see what the excitement’s all about for themselves!”

Teenage Mutant Ninja Turtles: The Last Ronin is available for order via booksellers and comic book specialty retailers. For more details and pre-order options, visit Penguin Random House or visit www.comicshoplocator.com to find a store near you.