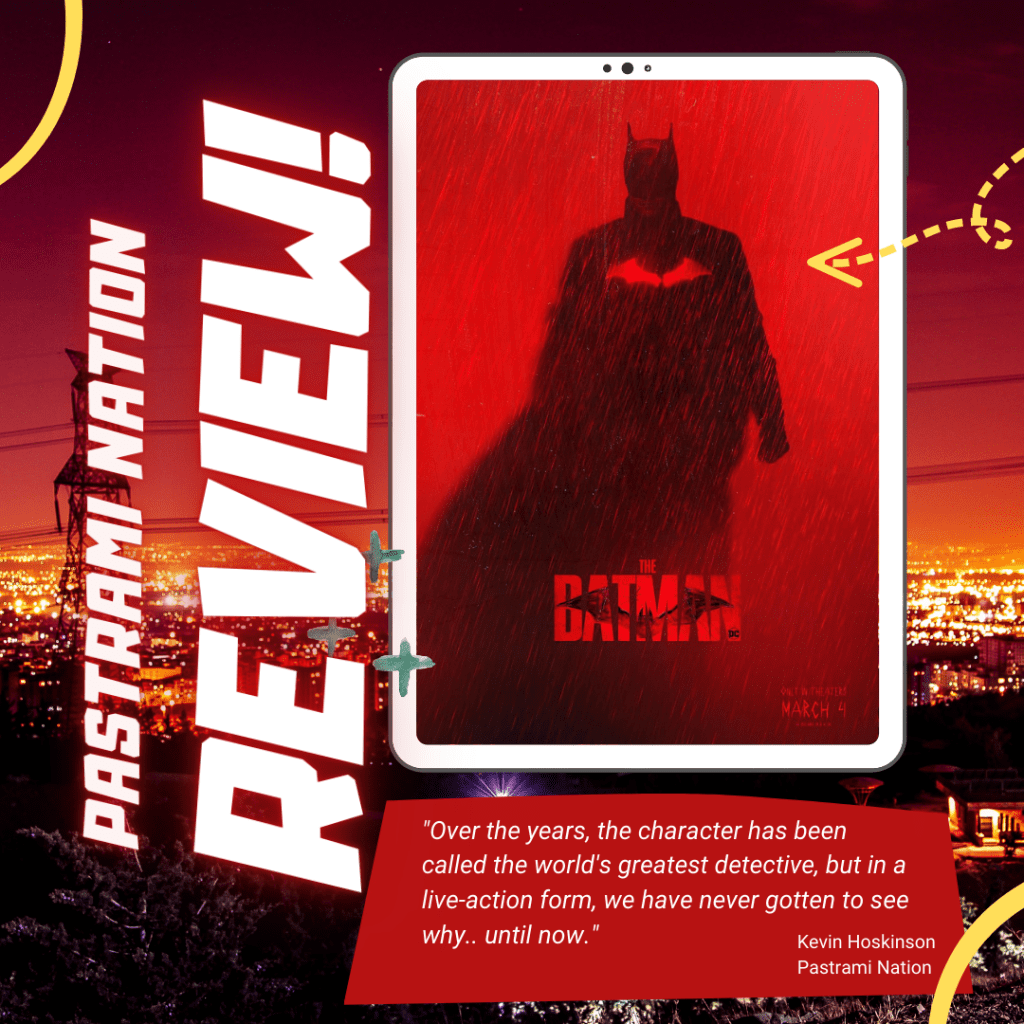 Directed by Matt Reeves, The Batman is a detective neo-noir story that plays by familiar rules. The film follows Batman as he tracks down a sadistic killer known as The Riddler. In typical fashion, he leaves riddles and clues around the crime scenes, and it’s up to Batman, with the help of police lieutenant Jim Gordon, to solve the mystery of who The Riddler is before more lives are lost. Along the way, he crosses paths with Selina Kyle, who is out for her own revenge, and Oswald Cobblepot (The Penguin), a shady club owner who has his share of secrets.

When I say it plays by familiar rules, it means that we have seen this story before, both in entertainment and real life. Back in the late 1960s, a serial killer known as The Zodiac Killer taunted police with indecipherable messages, leading them on a wild goose chase on a case that is still open today. Director David Fincher dramatized it in Zodiac, which this movie borrows heavily from. It also borrows from another Fincher classic Se7en, so much so that this version of Gotham feels like an amped-up version of the city that the movie takes place in. It’s a familiar story in that sense but what makes it stand out is the inclusion of comic book characters that we all know and love.

This time around, Robert Pattinson plays the titular character and is the most broody and emo version ever put on screen. The character is in his second year of crime-fighting, and he has fully committed to being Batman. One thing that stands out here is how little Bruce Wayne we get in the film. On the one hand, it’s great that we see more Batman this time around; on the other, it’s hard to buy into Pattinson being Bruce because we don’t get enough time with him. It’s a double-edged sword that works both for the film and against it. One thing that has always been fascinating is that Bruce and Batman feel like two different people. It’s a Jekyll and Hyde situation that we don’t get in this film, but it also makes complete sense. This is a version of the character who is still learning how to be both when one has completely taken over. This isn’t about Bruce learning how to be Batman; it’s about Batman learning how to be Bruce, which hasn’t been shown before. When we do see him as Bruce, it feels the same as his other persona. Eventually, something is going to click, and he will have to learn to be both.

This version of Batman isn’t the intimidating figure we have come to know. He hides in the shadows and moves very slowly. He’s almost like a predator tracking its prey, methodically planning out his every move to get results. He brawls like a champ when things come to fists and is always one step ahead of the bad guys. It reminded me of the fighting style in the Arkham series of games, taking on numerous guys at once and showing no mercy. His detective skills are also on full display, having to do some real investigating to get the bad guy this time around. The Riddler is the perfect villain to bring out that side of him, and it’s no wonder he was chosen out of all the rogues’ gallery to kick off this iteration.

Gotham City itself was mentioned previously but let’s dig into that a little bit more. Within the first few minutes of the film, we are introduced to a city with its own personality. It’s a version of Gotham that we had always imagined it being riddled with crime and not a place you would want to raise your kids. It feels fully established and truly makes you wonder why anybody would waste their time trying to save it. The cool thing about the movie is that it doesn’t spend much time explaining this world to the audience. There is a voice-over at the beginning with Pattinson letting us know what’s going on, and that’s it. He knows he can’t save everybody because it’s beyond help, but he’s going to do what it takes to do what he can.

Over the past three decades, we have had a total of ten films featuring the character of Batman. Since the 1989 Tim Burton film, there have been six actors to take the mantle of Bruce Wayne/Batman, each of them providing their own unique take. These numbers only apply to live-action movies, and it fails to take into account any of the countless animated films and video games featuring the caped crusader. At this point, it almost seems redundant to give us a new version of this character, and so many of us were left asking, “do we really NEED another iteration of this guy?”

The short answer is an astounding no, but the long answer is much more complicated than that. Over the years, we have seen a version of the world’s darkest superhero that was truly a force to be reckoned with. When Christopher Nolan set out to create his trilogy, he went for a more “grounded” and I take. His goal was to place Gotham City firmly in our reality and treat Batman as if he could be the rich guy next door. The villains were no longer these cartoonish caricatures of our imagination but rather real threats that we could face in our everyday lives. At the time, the threat of terrorism and anarchy was at an all-time high, and Nolan bet on our fears and won. He made Batman a symbol of hope, something we can always count on when things got rough. It was the same thing with Burton and Schumacher’s versions, albeit more realistic and a bit more tangible.

When talking about The Batman, none of that applies. It’s strange that after so many years of different filmmakers taking a crack at the property, it took this long for a Batman movie to be about Batman. It certainly takes a more grounded approach, much like Nolan did, but it feels different this time around. This is a slow-burn superhero movie that is almost three hours long (it could have cut 30 minutes, but it’s a minor complaint). It takes time to breathe and fully immerse you in the story and the world. The supporting cast (including Zoe Kravitz, Jeffery Wright, Colin Farrell, and Paul Dano) are all incredible and take this beyond your typical DC faire.

Over the years, the character has been called the world’s greatest detective, but in a live-action form, we have never gotten to see why.. until now. So did we need a new Batman? No. Are we glad that we got it and happy to see the character finally be given credit for what he’s most known for? That is an astounding yes!