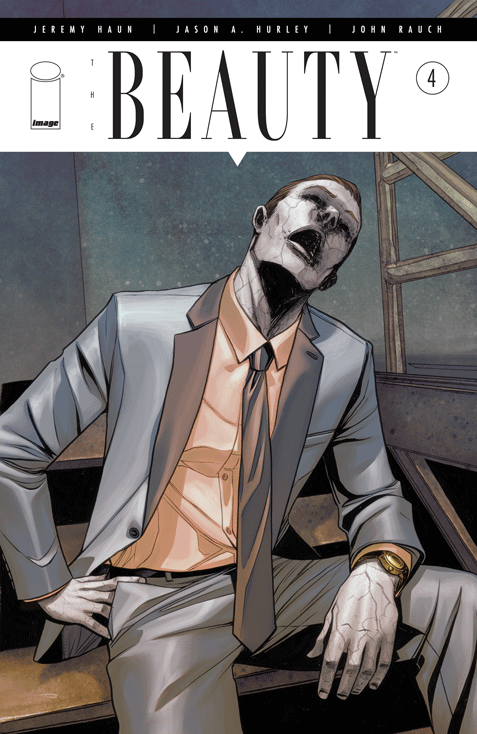 The Beauty #4 Review: Under the Gun

(Victor Valley)– Following the shocking revelations from the third issue, agents Foster and Vaughn continue to run for their lives as they attempt to expose the truth behind the Beauty before millions of people burst into flames. Dodging a deadly and skilled assassin, the two agents and their anti-beauty allies attempt to reveal the truth behind the lethal disease to the world before it is too late.

While the overall theme of the series has been society’s obsession with physical beauty, Haun has managed to squeeze in further commentary about the greed of the pharmaceutical industry. Packaged in an amazing story, this commentary illustrates some of the great vices of society (lust, greed, and narcissism) and shows how they could easily lead to our downfall.

In a series full of villains, Jeremy Haun is able to provide Foster and Vaughn with a terrifying and deadly new antagonist in the form of a faceless and nameless assassin hired to kill them. This new foe ups the ante and provides a good bit of action that drives the story forward. He is made interesting enough to leave readers wanting to know more about this skilled and confident man without a face.

Continuing the masterful art style that includes crisp lines and spot-on coloring, Haun and John Rauch provide stunning visuals to go along with a riveting story.

It is no secret that I have been a big fan of this series from the beginning. With a brilliant premise and a great story, I have been eagerly awaiting each month’s release.

Continuing to deliver amazing pencils and spot-on coloring, Jeremy Haun delivers a comic that is a great read and truly fitting of the title.