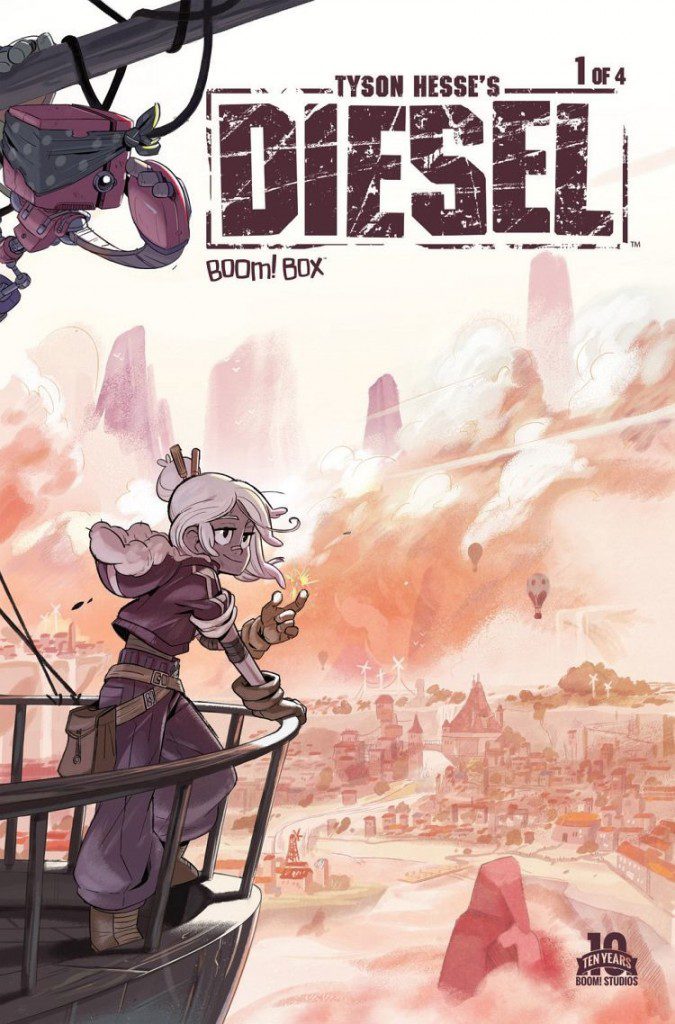 Tyson Hesse’s Diesel #1 Review: The Young and the Restless

(Victor Valley)– Making the jump from popular web comic to the print medium, Tyson Hesse’s Diesel has come to the Boom Box imprint from Boom Studios for a 4-part, high-flying adventure.

In a world where cities float among the clouds, Peacetowne has just pulled up anchor and sailed into the sky. Set to inherit the flying community upon her 18th birthday is Dee Diesel, a brilliant but lazy 17 year old engineering prodigy who will reach the life-altering milestone the next day. Before she can fulfill her birthright and take control of the city, disaster strikes and puts the entire population (and Dee) in jeopardy.

As the first issue of a 4-part story, Diesel #1 does a great job setting up the storyline and the characters in a very limited number of pages. Utilizing every frame to drive the plot forward, Tyson Hesse wastes no space as he begins his coming-of-age tale. Even for a new reader (such as myself) who has never had the opportunity to read the Diesel web comic, the narrative is very easy to follow and the reader finds themselves simply accepting that cities can fly and enjoying the story within that world.

Hesse does most of the heavy lifting in this issue providing the story and the pencils and doing an amazing job with both. Illustrating the book in a manga style that fits the tone and the characters perfectly, he crafts a touching and visually beautiful tale.

Rating: 5 out of 5. With amazing artwork and memorable characters, the last pages seemed to come too soon and left me counting down the days until the second issue.