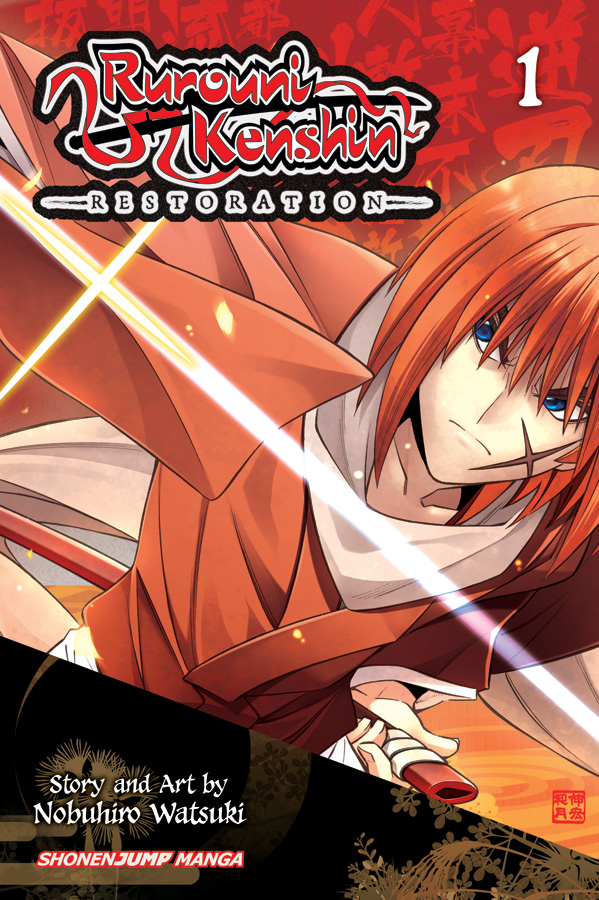 (San Francisco)– VIZ Media, LLC (VIZ Media), the largest distributor and licensor of anime and manga in North America, celebrates the return of one of manga’s most iconic samurai – Rurouni Kenshin – with the release of RUROUNI KENSHIN: RESTORATION. This new series is published under the Shonen Jump imprint, rated ‘T’ for Teens, and carries an MSRP of $9.99 U.S. / $12.99 CAN. A digital edition is also available on VIZ Manga and the VIZ Manga App for $4.99 (U.S. / CAN).

During the violent upheaval of the Bakumatsu era (1853-1868), Hitokiri Battosai was a feared and ruthless assassin. But now that the Meiji Restoration has begun to heal the wounds of civil war, Battosai has taken up a new name and calling! He is now Rurouni Kenshin, a ronin (masterless) wanderer who has vowed only to draw his sword to protect those in need. But not everyone is pleased with Kenshin’s new direction, and enemies from his dark past have vowed to bring him down!

“Rurouni Kenshin, a slight and mild-mannered young man who once served as an assassin for anti-Shogunate forces, returns with his reverse-bladed katana and his deadly skills in this fast-paced new treatment from creator Nobuhiro Watsuki,” says Pancha Diaz, Editor. “Watsuki’s artwork, particularly his kinetic action sequences, shine in this new edition and fans of the original RUORINI KENSHIN series, as well as those interested in adventure, romance, Japanese history, and samurai culture are invited to join Kenshin, Kaoru, Yahiko and others as they take up their swords once again!”

Manga creator Nobuhiro Watsuki earned international accolades for his first major series, RUROUNI KENSHIN, about a wandering swordsman in Meiji Era Japan. Serialized in Japan’s Weekly Shonen Jump from 1994 to 1999, it quickly became an international sensation, selling more than 57 million copies and inspiring a spin-off short story, an animated TV series, and several successful animated feature films. The RUROUNI KENSHIN series is published in North America by VIZ Media under its Shonen Jump imprint and is also available as a VIZBIG omnibus edition. Watsuki’s other series, BUSO RENKIN is also available in English from VIZ Media (rated ‘T’ for Teens) and also digitally through VIZ Manga and the VIZ Manga App.

For more information on RUROUNI KENSHIN or other titles from VIZ Media, please visit www.viz.com.