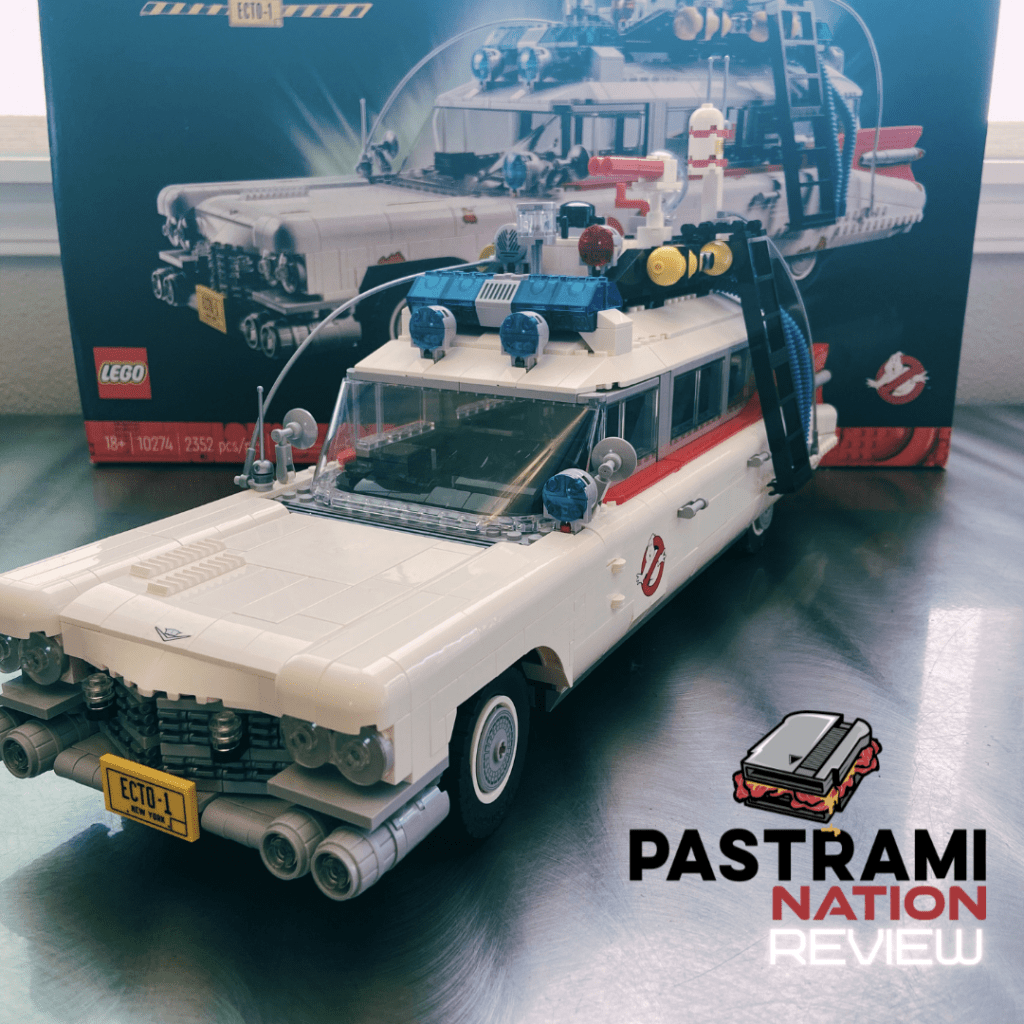 Ghostbusters! It’s a franchise that has captured the imagination for decades and shows no signs of going away. It’s nostalgic for many and new for some. Even if you haven’t watched the 80’s films, odds are you have gotten the theme song stuck in your head at some point or recognize the Stay-Puft Marshmallow Man stomping through New York.

The franchise also features one of the most iconic vehicles in cinema history. Much like the Millenium Falcon from Star Wars, it is a vehicle that is so iconic that fans and newbies alike recognize it. The Ectomobile, or Ectomobile-1, is The Ghostbusters command vehicle, and it’s one of the coolest cars ever put on screen.

Now, Lego has teamed up with GM and Sony to create a detailed replica of the Ecto-1, a 2,352 piece set that is one of the most intricate sets on the market. It was an absolute blast to put together and one of the biggest sets I have ever done. But before we get into the details, I’d like to mention a couple of things. While it’s the same car seen in the 1980’s films, the set was designed to coincide with the release of “Ghostbusters: Afterlife.” Some features are taken from the new movie, most notably the Gunner Seat and the placement of the ladder. Those things aside, it’s still the exact car you know and love.

As mentioned earlier, this set is 2,352 pieces. It is separated into 12 steps, with each step consisting of a bag of Legos (sometimes two per step). Laying each step out on the table made it seem like a daunting task, but as all fans of Lego know, the fun was just getting started. The instructions come printed in a 310-page manual, which also includes facts about the origins of The Ectomobile and some cool behind-the-scenes facts. Each step is illustrated, and it was very easy to follow, even when I lost my place and had to find my way back.

With each step completed, there was a notable amount of progress made. I could see it all coming together, and it amped up my excitement. The journey is the fun part, but I couldn’t wait to see the finished product.

After a total of about 8 hours, which was spread out over a few days, I was finally holding the Ectomobile-1 in my hands. Measuring in at 18.5″ long, 8.5″ high, and 6″ wide, the finished set is impressive. It was bigger than expected and has a very sturdy build. There are numerous moving parts, most notably the Gunner Seat actually popping out of the car with the push of a button. The steering wheel turns the wheels, and when rolling the vehicle, the radar on top spins.

The amount of detail on it is incredible. Not only are you building the car’s shell, but the engine is also built separately and then placed in the hood. The interior is built as well, with stickers throughout that act as gauges, a radio, proton packs, and a number of different devices. This set comes with many stickers to place in and on the vehicle, but they are all optional. For example, there are stickers for the car’s exterior to give it an older and rusty look. I opted out of those in favor of a cleaner and newer look, and you can do as you please, the way Lego intended.

As well as the Ecto-1, this set comes with a couple of cool little extras. There is a small ghost trap on wheels that sits in the back of the car. When you pull a small lever on the outside, it opens a ramp, and the trap rolls out. It’s small, but it’s a lot of fun. As an added bonus, there is a bag of Stay-Puft marshmallows that are made out of bricks. It’s a cool addition to the set.

This is one of the most fun and rewarding Lego sets I have had the joy of building. It will make a stunning addition to your collection, and it’s an incredible display piece. Or you can play with it. Either way, it’s well worth the 199.99 dollar price tag, and I highly recommend picking it up.