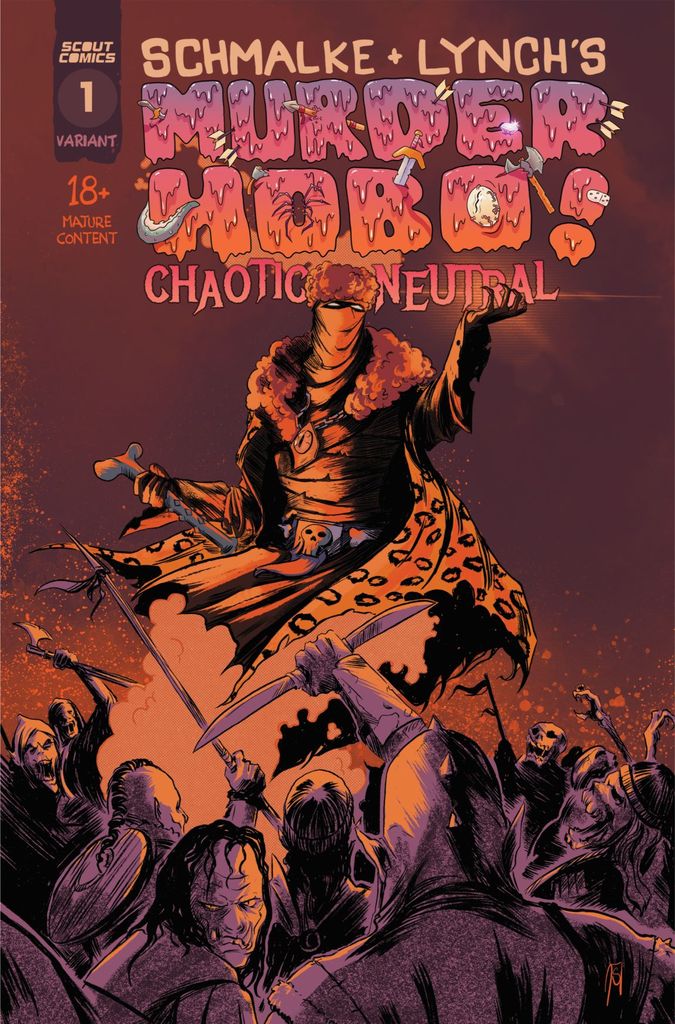 Today I take a look at Murder Hobo! Chaotic Neutral from Scout Comics.

The story starts out with Spectra Liaison arriving at a village. When she attempts to speak with the villagers, all they say is nonsense. Unsure as to why this is happening, she goes into town trying to find the inn. A floating creature with a head that looks like a mushroom cap, two eyes poking a foot out of its head, and dozens of arms, speaks to her in good ole common. The creature explains the situation to her, and with a devilish gleam in her eye, she decides that she needs to intervene on the town’s behalf.

This comic book is a bloody mess…in a good way. There is plenty of blood, gore, and guts flying around this book depicting just how gruesome it is to be an adventurer. Rather than a single story detailing the escapades of a single person, there are four adventurers and four short stories—each with their own tales of intrigue. The dialogue is more along the lines of what D&D players talk like when they aren’t taking it super seriously, and they are all over the age of 18. The art works for this kind of story, though it is crude and simple most of the time. They also break the fourth wall at times to address us, the readers, and it works for this. I like a good fourth wall break, and they manage to do this in a way that doesn’t take you out of the story, similar to how an old Animaniacs cartoon has several short stories. The characters tend to look at the camera speaking directly to the viewer. As I read it, I was reminded about Adventure Time as it has the same art style (mostly) and feels more brutal and with lots more blood. The comic book certainly doesn’t take itself too seriously, it works, and I like it.

The clothing of some of the characters seemed to be less than appropriate for adventuring, and it at times took me out of the story instead of immersing me into the tale the writers were telling. Also, the stories tended to be about either drugs or sex, which can make for a type of motivation; it felt lacking as a reward for an adventure. Only one out of the four wasn’t about either sex or drugs and felt the most like a D&D adventure I would take player’s through. The artwork changed halfway through as well, we went from an Adult Cartoon Network style to an Adult Swim style, to a Codename Kids Next Door, and that didn’t really work for me. I preferred the more detailed Adult Swim art style to the Adult Cartoon Network style, and when they showed the KND style, it just felt weird and off, as if I should be watching an animation of this instead of reading a comic book.

Overall this is a pleasant break from the seriousness of some of the other D&D adventures I have read and even ran in my games. As fun as playing a serious game is, it’s always a nice break to take things easy and enjoy the game. This comic book felt like someone decided to play some D&D, but they weren’t trying to accomplish any kind of quest; they were trying to see what they could do and how much fun they could have while doing it. It reminded me of the first adventure I ever played in several years ago, but that is a story for another day. If you ever want to take a break from serious adventures and relax with some bloody fun, then this comic book is the one for you.