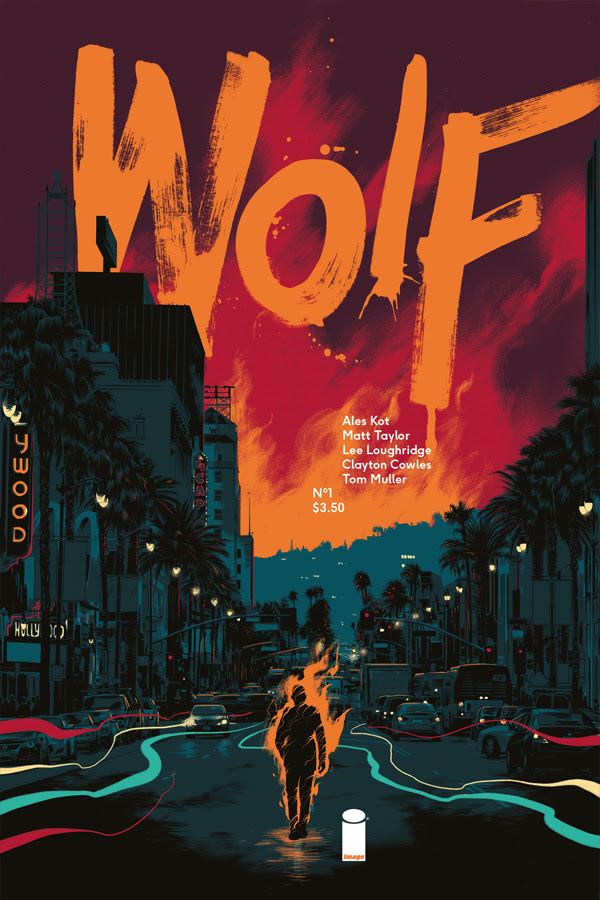 Wolf Leads the Pack This July from Image Comics

In an in-depth interview with Entertainment Weekly, Kot detailed his inspiration for the new epic:

“… if I go to where the inspiration really came from…it could be simply the image of Antoine Wolfe, our main protagonist in #1, a hard-boiled ex-army detective who can see too much for his own peace of mind, living in a glorified shack in Echo Park surrounded by boxes of books, empty bottles of booze, prescription pills and some things we can’t quite figure out until the end of issue one. It’s a cliché, but the biggest clichés are often clichés because they are true: it all starts with a character. And Antoine is real. (…) the Los Angeles we explore is decidedly our Los Angeles, but it has a massive amount of citizens we do not see. And Antoine Wolfe does, which means he’s in demand. Of course, there’s also something strange crawling through the hills, ripping people up… a girl who just lost her parents… a hyper-wealthy racist named Gibson Sterling… vampires… werewolves… and a whole lot of uneasy, oozing atmosphere. But not all is doom and gloom, because we’re in a hyper-sunny LA, the kinda place where it might be Christmas and you won’t even notice.”

WOLF incorporates the crime noir thrills and character development of True Detective with the mythical stakes of Neil Gaiman’s Sandman in this original fantasy, horror saga. Antoine Wolfe is a hard-boiled paranormal detective with a death wish and has to cope with sudden responsibility for an orphaned teenage girl who might be the key to the impending apocalypse, California-style.

The road to hell and back begins in a maximum-sized first issue, with fifty-eight pages of story and no ads. WOLF #1 (Diamond Code: MAY150550) will be available on July 22. The final order cutoff for retailers is Monday, June 29.