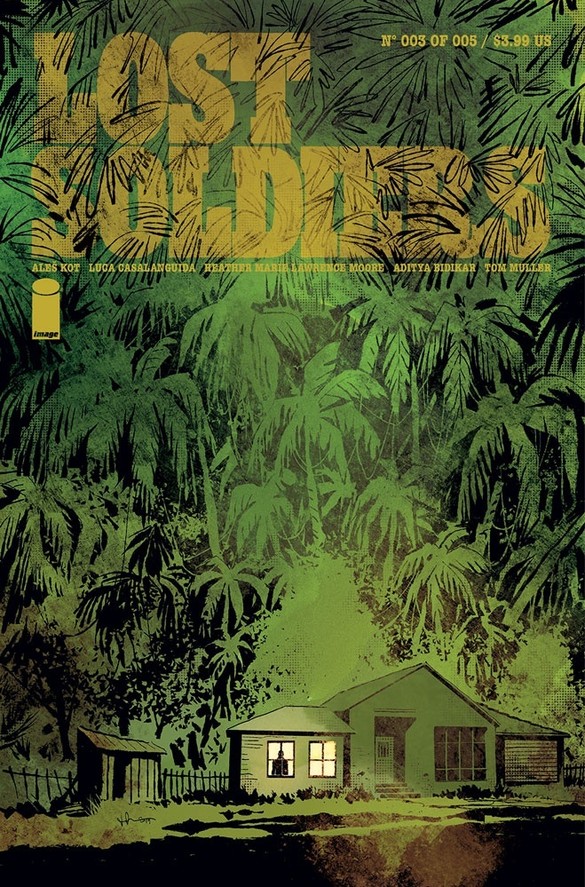 The story begins at the scene of a warehouse shootout, with SUV’s acting as berries for each side. On one side, we see two old guys, and on the other, we see a team of younger men. The younger team is taking heavy casualties. Unfortunately, the skills and experience of a two-person team will only take them so far. Once the odds start to turn against them, they decide to utilize the tried and true tactic of “retreating.” One drives while the other provides cover fire for their escape. The next couple of pages contain a car chase ending in all the vehicles crashing and seemingly all but one of the old men dying.

After some time passes, the surviving old man travels back to the USA from Mexico; bandages are wrapped around one of his hands and nose. Traveling to Huston, he parks in front of an old abandoned-looking house, where memories of the past flood his mind showing us how bittersweet nostalgia can be…

The story of this issue is shown rather than told; by that, I mean there is not very much dialogue, and all of it is in the last ¼ of the comic book. Throughout the beginning, we see just how deadly the main character is, but we are also shown that he is not invincible. With the focus being on two old guys, it’s clear after the first couple of pages which the main character is while also providing us with a challenging antagonist who is sure to come back to haunt the protagonist in later issues.

With the story showing you through art rather than speaking, they effectively tell a story that you don’t quite get until after reading it and have placed a good portion of thought into it. This story is thought-provoking, they don’t hold your hand, and they know that the readers are smart enough to figure out what is going on without the need to flat out tell you who is who and what is going on. The art itself is very reasonably detailed, even going as far as to show the hair on some of the characters’ arms. The colors are cold and dark, showing emphasis where it is needed to not distract the reader from what is important; even the guns show a lot of detail that you might not see in other comics.

I like what they are doing here by showing us what is happening rather than telling us; this allows us to feel the seriousness of the stakes at hand. They don’t hold back on maturity, and they also don’t add unnecessary cursing. The dialogue feels natural, as if it were a conversation real people would have rather than one with lots of cursing and words people just don’t use in everyday conversation. In the last ¼, it slows down, and they tell more, which is needed for the setup of what is to come next. I also like that ¾ of the book is a drawn-out monologue of the main character comparing a firefight to drums.

A negative part of showing more than telling is that I had to look back at certain parts to understand better rather than know what is being expressed in one read. At first, I could not tell if they were narrating the events at hand, if they were telling a story through poetry, or if the monologue were being told through a metaphor. While it could have well been any of those, it was more of an analogy of what death feels like to the main character. I didn’t get that until after I went back and more closely analyzed what was going on and what was trying to be expressed. They also don’t give us the names of the protagonists; I don’t mind not knowing who every single character is; it is, however, important to know who the main characters are. I would have preferred if they gave us their names at least once; I would even settle for a nickname or just a last name rather than no name. Not knowing who the important people are makes the main characters more forgettable, making the overall story less memorable.

Overall, this comic book is an okay read if you like crotchety old men who are skilled in the art of warfare. They don’t do anything super original since it sets up a story of revenge. None of the characters are memorable other than their physical features. This comic book shows you a lot of what is going on and doesn’t hold your hand to explain things except when it’s important. They trust us to be smart enough to pick up the story and put the pieces together through what little dialogue they give us and the actions that are being made by every character. The action is excellent throughout; they do not hold any punches or give unrealistic portrayals when under fire. The characters are shown as smart and knowledgeable, no one holds back, and they do what they need to do to survive.

Jeremiah Gagnon is a happy-go-lucky goofball of a guy with a passion for all things Superheroes and Comic Books. He is also a Dungeon Master for an on-going Dungeons and Dragons game. Gagnon is an amateur Magician as well. He currently lives in Milwaukie, OR. You can follow him on Facebook, YouTube at PressXForAwesome, Instagram @unicyclezombie, and Soundcloud.