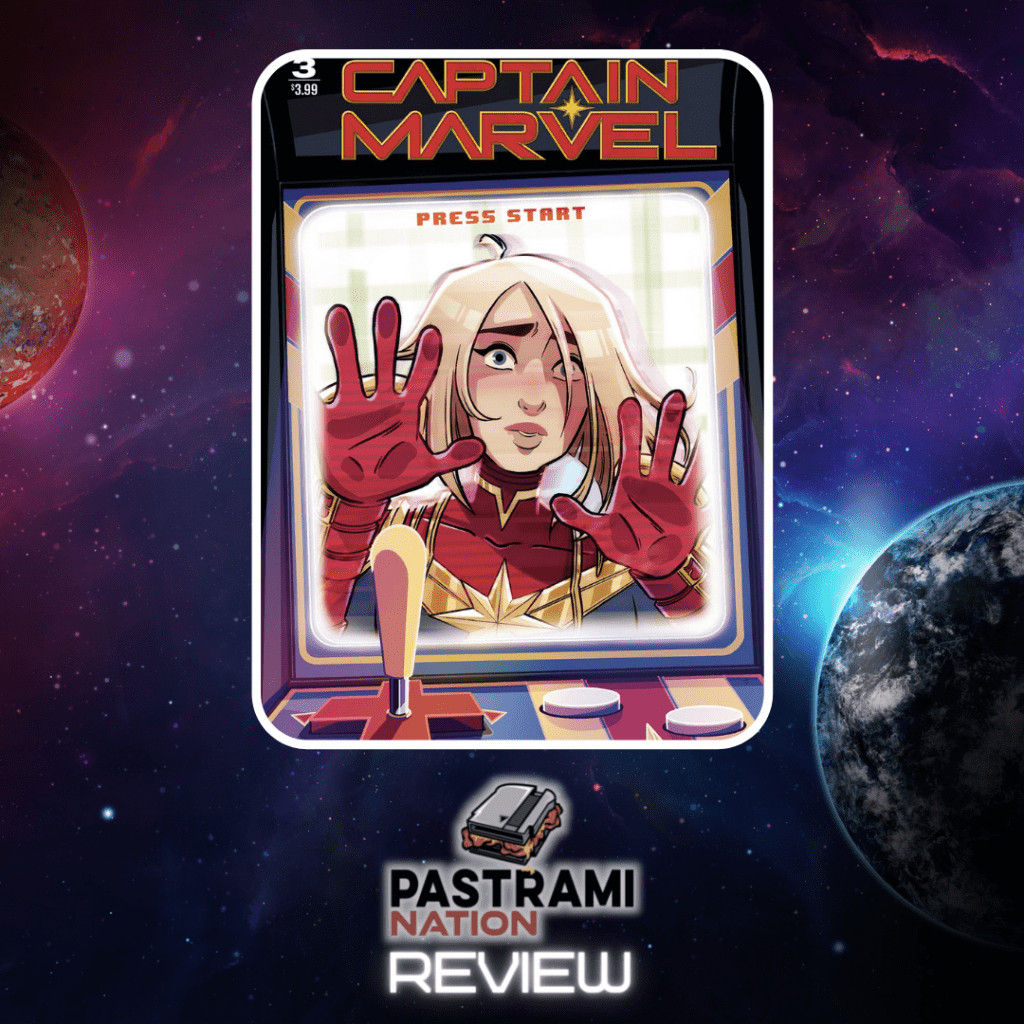 For this review, I check out Captain Marvel V2. #3 from IDW.

Our story begins with Carol Danvers A.K.A Captain Marvel waking up in her apartment. She gets up, feeds Chewy her Flerken, and meets Jessica Drew A.K.A Spider-Woman for breakfast only for their conversation to be interrupted by a small group of street thugs attempting to rob a shop. The two heroines quickly and easily dispatch their foes without breaking a sweat. This continues on for a day or two. Then, one day things start to change around Carol, and she has no idea what is going on as her cats write a strange message in their cat food, and the building she was supposed to meet Jessica Drew at has suddenly disappeared.

As the rest of the comic book continues, things get weirder and weirder for Carol. She attempts to call for backup with no answer. She even flies over to one of the Iron heroes only to be met with more strangeness. At least the thugs she fought the last few days are still around, only this time they are different. Captain Marvel flies around attempting to figure out what is going on and the most unlikely of beings keeps popping up out of nowhere, leading her to relative safety.

There is a lot of mystery in this one, and the answers await us in the next book. I have my ideas about what is going on through the context of certain things that happened during this book and a sneak peek at the next book’s cover. I love a good mystery, and this book has piqued my interest. I like that they bring in seemingly random things, and certain characters act strange to convey that something is very off about the world around Carol. They do a good job of showing us references to things we, as the audience, would understand. If I were in Carol’s shoes with my current knowledge of geek culture, I would have some kind of clue as to what is going on, as all of the strangeness can be attributed to something all gamers know well. This book pulls on my gamer side and certain gaming fantasies. The trope they are going for isn’t new by any means, but it is interesting to see how they are doing things, and I would like to see where this goes. The artwork and use of color’s is just as good as it has always been, I am thankful for their consistent use of the same art style as they have had since the beginning of Marvel Action Captain Marvel Vol. 1 Issue #1. I have read other comic book runs where the art style changed halfway through the run, and while it wasn’t bad, it lacked consistency and was unwanted.

I wouldn’t say I liked how quickly everything went from being normal and the same every day to everything being messed up. I would have preferred a more extended build-up. If they spent the entire comic book showing us how similar two or three days were in Carol’s life and then on the fourth and fifth day, everything started to go haywire, it would have made for a more exciting storyline. I am curious how the entire day would play out, and seeing small changes in the background slowly over the course of a week would have been a lot cooler. For example, if we saw Carol and Jessica eating at the same restaurant and one day the napkin holder was silver, but the next day it was red, or the thugs wore and acted the exact same way for the first two days and then on the third day they started glitching in their movements or speech, but they wore the exact same clothing despite their shirt being torn to shreds the day before. I think something along those lines would have made for a much more interesting comic. This book could have ended on a cliffhanger of Carol just seeing that something very strange is happening as she walks to the restaurant she always goes to find it had vanished. Also, the cover showing Carol trapped inside of an arcade cabinet ruins the mystery a little bit since as soon as the real action starts, it’s obvious what is going on.

Overall this comic book was a good one. I enjoyed what I read. It reminded me of other stories using the same trope that I really enjoy. The mystery of who is behind all of this and how they managed to trap Captain Marvel, the strongest Avenger, has made me curious. I hope they make this storyline last as long as possible, maybe a simulation inside a more extensive simulation. Carol eventually meets other heroes or possibly villains, and they all have to work together to get back to the real world. I’m hoping that they pull some excellent twists and don’t waste the potential for some fascinating storytelling they have just started telling. I’ll be sure to read the next comic book in this line.