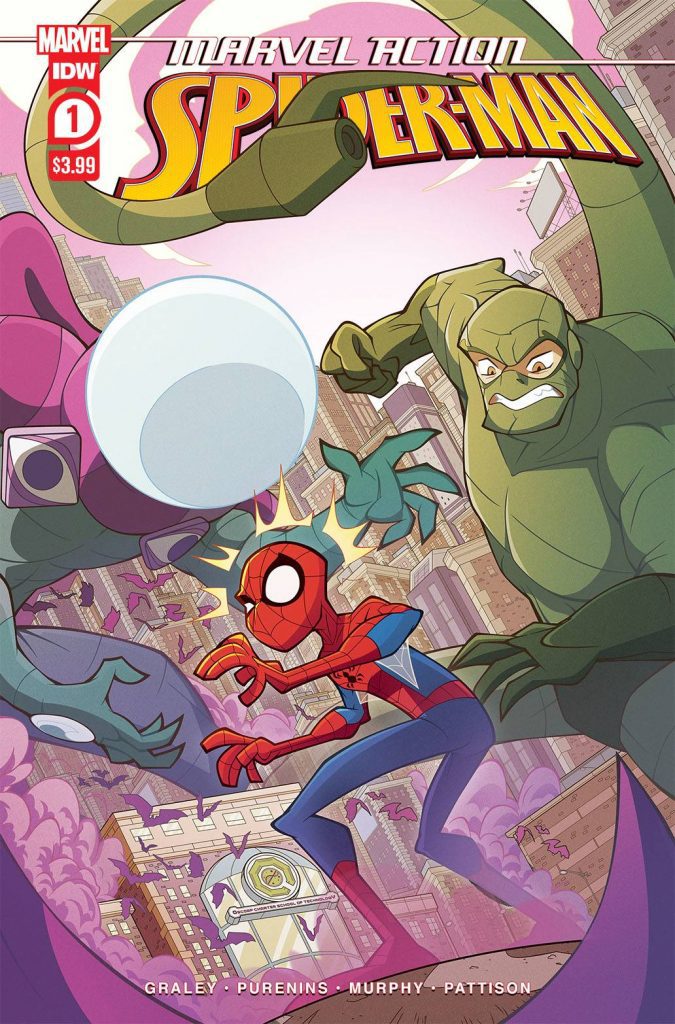 For this review, I take a look at Marvel Action Spider-Man V.3 #1 from IDW. This issue is by Sarah Graley, Stef Purenins, and Philip Murphy.

Peter awakens at 6:45 am only to rush out of the house moments later, telling his Aunt May that he is leaving early for a study group when in reality, he is heading out for his superhero activities. Mere moments after leaving, he finds just what he is looking for as a mugging occurs in an alley below. No sooner does he finish his foes, he realizes that he is now late for school at O.C.S.O.T (Oscorps Charter School of Technology).

After arriving late to school, Peter bumps into Principal Octavious, who then berates him for arriving a half-hour late to school. Peter quickly apologizes and heads to class. His first class of the day is P.E with Mr. Gargan. Shortly after arriving, two of his classmates loudly announce how Peter is late, which draws the attention of Mr. Gargan, who yells at Peter for being last. At his next class, he meets with the two other people in his group project, and things keep getting worse for Parker as the day goes on.

Throughout the rest of the book, we see how Peter responds to having a bad day. It feels like typical schoolboy behavior, at least for someone who has spider-like powers. There is a cliffhanger ending that hints as to what is to come.

The artwork on this is good. There is nothing terrible and nothing amazing about this. There are plenty of details, and everything is easy to see. Seeing how this is the third volume in the Marvel Action Spider-Man series, it feels like they are showing a different background to Spider-Man than the traditional one. I hope that it will lead to us finding out how all three spider people met and became a crime-fighting trio.

I like that they made him younger and didn’t make this his origin story. At this point, with all the movies and other stories depicting his origin, I am glad they are starting it off a little while after he has had his powers. I also like that he seems to be happy for the most part and isn’t still sad about his uncle’s murder; as important as that event is, I’d much rather read about a Spider-Man who has moved on and is focused on the present than trying to fix the past.

What I find not so good is that he is in a special technical school instead of a regular school, and they still have regular classes. Granted, they haven’t shown us every single class yet. It seems to me that a school focused on technology would not need a physical education class. Also, he still has a bully doing the typical bully behavior. At a school for intelligent people, it seems that someone roasting him with their brain would be more likely than being pushed around by said bully. A particular character does a certain superhuman feat almost out in the open, which seems like a move someone who is trying to keep a secret would not do.

Overall this comic book is good for what it is. While I hope that it gets back to the spider trio and their adventures eventually, I am glad to see a younger Peter living his life and figuring out how to balance his superhero life and school life. Depending on the route they take this, it will be a nice change to see what events play out in young Parker’s life that turn him into the adult that he is in volume 1 & 2. This is definitley a story for younger readers who are newer to Spider-Man, and I would recommend it to any middle schooler or even young high schooler looking for a place to start reading Spider-Man.