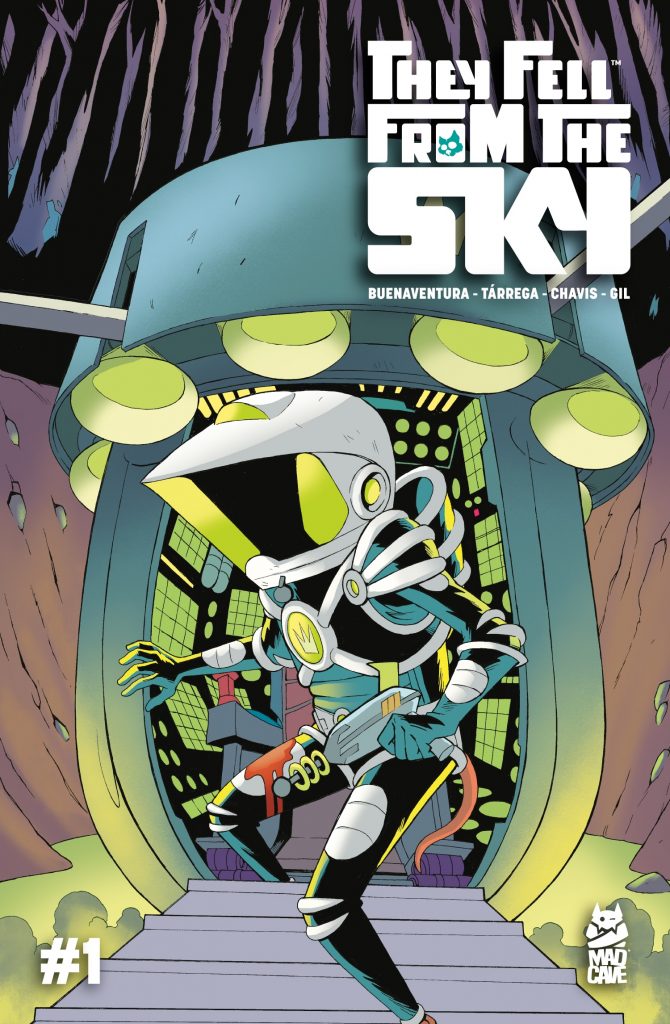 Comic Book Review: They Fell From the Sky #1

New from Mad Cave Studios this winter is They Fell From the Sky. Readers are transported into a new journey, a space journey, that is!

Tommy seems to be your average teenager. He’s got his routine of balancing school life, helping his family at their farm, bickering with his older sister, and doing what he loves best: spending time with his friends in their treehouse. They enjoy being faithful watchers of their favorite science fiction show! Everything is as it should be until an alien vessel crash lands in the woods surrounding Tommy’s farm.

The creative team, consisting of Liezl Buenaventura (W), Xavier Tarrega (A), DJ Chavis (C), and Joamette Gil (L), have put together a solid first issue! The storyline is reminiscent of earlier years and fully embodies older sci-fi cinema! It brings to mind titles such as: “E.T.: Extraterrestrial,” “The Goonies,” and “Stranger Things.” However, it is set in the modern-day. That being said, the team skillfully weaved familiar stories with present-day technology. Readers get the best of both worlds, pun intended.

The story is what draws the reader in, and the art keeps it going! Bold and vibrant are the colors. One almost expects the main characters in their ‘80’s vests and trucker hats. But that’s what makes the comic book exciting! Also adding to the storytelling are the details, almost hidden in the background. You’ll find Star Trek-like posters, fantasy action figures, and more that lends to Tommy’s love of science fiction. This issue features iconic scenes brought to life: the group riding their bicycles to Tommy’s encounter with meeting an alien in the woods. However, “They Fell From the Sky” is different enough; that it isn’t just a retelling of the same story. It’ll be intriguing to see how Tommy adapts to his newfound situation!

Be sure to keep your eyes open for this interstellar issue at your local comic book shop!