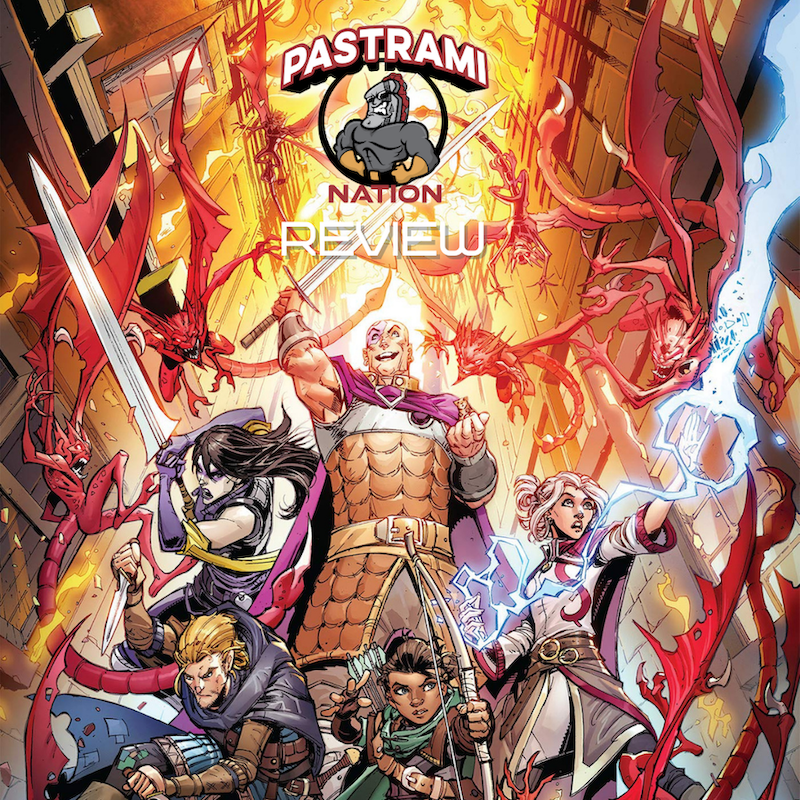 The Creators of D&D Days of Endless Adventure bring yet another exciting and thrilling tale with the same cast of characters in this new graphic novel, Infernal Tides. Knowing how well the last book turned out, I am eager to find out what happens next to our band of heroes.

Within the first few pages, we are greeted by the Mighty Minsc and the beautiful Delina as they shop around Baldur’s Gate, only for their spending to be halted by a Knight of Zariel known as Haruman as he chases down two warriors. A battle ensues that breaks blades, new friends are made, and a McGuffin is passed between kin. Minsc combines his poetic way with words to his swordplay while Delina sends thunderbolts and lighting, which is very, very frightening, at the foe, only for the battle to end with one of their new friends captured and the villain escaping. Within the hour, the party from adventures past and new friends meet at a tavern for introductions and learn why their new friend, Aubree Lucent, and her father, Alistair, were attacked and what the foe was after…

As the rest of the graphic novel continues, all hell breaks loose, and only our band of heroes can put an end to the devilish evil that threatens the city. Devils, deals, and pirates oh my, it gets crazy as the story progresses. I found it hard to stop reading, and even after the adventure was over, I wanted more! Just like before, it felt just like someone was playing a game of D&D and turned the adventure into a comic book. I kept thinking that they took the adventure from the book Descent into Avernus, which is all about the nine hells of the Dungeons and Dragons universe and how the city of Baldur’s Gate is taken into Avernus; only in this adventure instead of Baldur’s Gate, they use the city called Elturel. It’s always nice to see other adventuring parties take on a published adventure and how they go about completing the quests. It gives ideas on how to go about the same adventure with your own party. I never had much of an interest in Descent into Avernus, but I am interested in learning more about it after reading this. There was also a band of hellish pirates that played a significant role in this, and it was cool to see their mosh posh of races all working together.

While there weren’t many things I didn’t like about this book, the whole adventure in hell seemed short as if the build-up to the city being sucked into hell took longer than the actual part of being in hell. It would have been nice to see a wider variety of demons and devils and their interactions. It might have been cool to focus on a troupe of demons and devils to see more how they interacted with each other. Maybe even add that some of the demons didn’t like their superiors and saw that it would benefit them more to help the heroes rather than follow their evil superiors, even having a demon/devil join the main group even for a short while. Also, adding a platoon or two angels to fight the hellspawn during the main conflict would have added more. We could have seen a large-scale battle between great and terrible armies with one of the gods leading the angles to face their foes; then we could have seen a fight between Zariel and some other god, and that would have been a battle of epic proportions. They could have even added a scene or two where some of the higher ranking devils above Zariel conversed about the events and with Zariel herself, which could allude to something worse for later on in the series. Also, seeing how the rest of the city reacted to being sucked into hell and after the event would have added a nice touch.

Overall this adventure was a really good one and definitely added to the scope of what they set up in the last Graphic Novel. This party has really good synergy, and you can tell that they all care for each other, no one person is trying to outshine the other, but instead, they complement each other’s strengths and support each other’s weaknesses. I am curious to see what the next adventure will be and if it will be based on an already known sourcebook or if it will be more original. I would love to read about the group having to go out to sea, underwater, or even island hopping like a combination of Ghosts of Saltmarsh meets Tomb of Annihilation.

Jeremiah Gagnon is a happy-go-lucky goofball of a guy with a passion for all things Superheroes, D&D, and Comic Books. He is also a Dungeon Master for an ongoing Dungeons and Dragons game. Gagnon is an amateur Magician as well. He currently lives in Milwaukie, OR. You can follow him on Facebook, YouTube at PressXForAwesome, Instagram @unicyclezombie, and Soundcloud.